A staggering 100 million children making up about half of India’s school-going children cannot read a grade-appropriate text or solve a grade appropriate math question. Trying to bridge that gap through “low-cost, scalable methods” is Pratham, an NGO dedicated to educating underprivileged children and youth in India that last year raised $11.5 million in contributions in the US.
“Rather than build schools, we partner with local schools and community stakeholders, including government, to multiply our impact,” Bala Venkatachalam, executive director of Pratham USA who leads its fundraising activities in the US, said.
In a recent success story, Pratham piloted learning camps in Jehanabad, a rural district in Bihar in 2012. The programme identified students in Grades 3-5 who were struggling to read and perform basic math operations.
“Through our intensive coaching in partnership with district education administration, we helped these students improve their reading and math skills in just three months,” Venkatachalam said.
Government officials were delighted and are now working with Pratham to roll out the programme across the entire state, he said.
To “deliver quality education to underprivileged children and youth across India,” Pratham designs and implements large-scale programmes to teach basic reading and arithmetic at the primary school level.
These reach an estimated two million children in over 700,000 villages each year.
To address gaps in the education system, Pratham has since 2008 expanded its focus to include young adults, training them in vocational skills so that they can join the work force.
In collaboration with industry, Pratham has piloted training programmes in soft skills like communication, hospitality and construction.
And in 2011, Pratham piloted its Second Chance programme dedicated to lending support to girls and women who were forced to drop out of school so they may complete their secondary schooling. 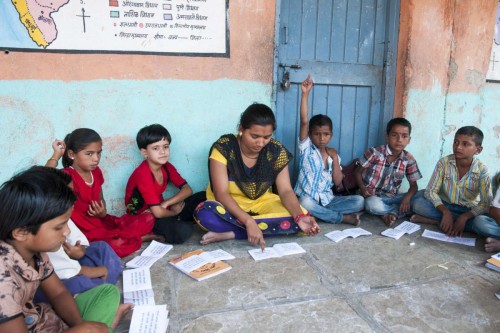 Pratham USA chapters in 14 US cities host their own events, which normally includes an annual gala.
They also fundraise through online and in-person appeal campaigns to individuals, corporate sponsors and institutional funders.
Pratham USA raised $11.5 million in contributions in 2013 and less than 10 percent of its revenue went to fundraising and administrative expenses, according to Venkatachalam.
“We are proud to have been rated a four-star charity by Charity Navigator for four consecutive years for our sound fiscal responsibility and commitment to transparency,” he said.
To raise awareness about the educational needs in India and to mobilise resources, Pratham USA embarks on several activities throughout the year, including an annual Readathon for younger children and teenagers.
“Over the course of the summer and fall, children, encouraged by parents and grandparents as mentors, read books in order to help raise money for Pratham literacy programmes,” he said.
The NGO also hosts conferences and sponsors outreach activities related to Pratham’s mission of “every child in school and learning well.”
Looking to take a sabbatical, Venkatachalam who earlier worked as a senior consultant for KPMG in India joined Pratham in their Gujarat programme as their Operations Head after researching several organizations.
“To me, what stood out about Pratham was their growth in less than a decade and, more importantly, their approach to solving some of the basic challenges in primary education,” he said.
“My time with Pratham in India (initially in Gujarat and subsequently in Delhi) was a transformational experience,” Venkatachalam recalled.
“The majority of kids raised in urban India are blissfully unaware of the disparities that exist in Indian society, as was I at the time,” he said.
“Pratham provided me a perspective on the lives and challenges that over 75 percent of India faces on a daily basis,” as he travelled across “urban and rural India and experienced first-hand Pratham’s phenomenal education