Home News American News Satya Vs Sundararajan: The war is on
Advertisements 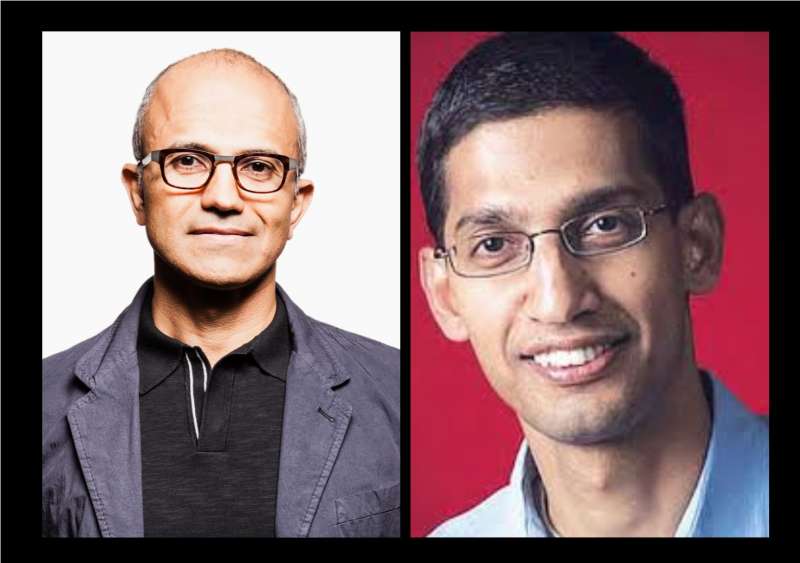 Chennai versus Hyderabad? In the battle of the technology titans, a reorganised Google gets a new general, Chennai’s Sundararajan Pichai, to face off against Hyderabad’s Satya Nadella, Microsoft’s CEO.

In the fast-changing technology landscape the two companies compete in several lines of business and continue to reinvent themselves for survival, shifting business plans and pushing into new areas as they compete against each other. As the world moves beyond desktops, laptops and conventional servers, the focal points of their current competition are in cloud computing, where Microsoft has an edge and mobile technology, where Google leads.

The two companies started with two different technologies appropriate to the time they were created, operating system for Microsoft and search engine for Google, and then added others from each others’ repertoire or scrambled into new areas. Now, even as they get set to do battle in new areas, the two companies are also fighting to preserve niches against each others’ onslaughts and for control of emerging areas.

Google makes its money from mainly advertising – about 90 percent of the total revenue – which is driven mostly by the search engine and the data it gathers. Microsoft’s revenue stream is somewhat more diverse with 68 percent derived from software (with 49.5 percent coming from commercial licensing of software and server products) and a puny 4.8
percent from advertising.

Take a look at their respective strengths and weaknesses using data from the research company NetMarketShare. While Microsoft’s Windows controls the desktop operating system market with a 92 percent share, search engine is Google’s turf with 68.8 percent market share agains Bing’s meagre 5.44 percent. On desktops, Microsoft’s Internet Explorer
dominates the browser market with 53.47 percent share to Google Chrome’s 27.66 percent, but it is reversed in mobile, with Chrome and Android browsers’ 46.1 percent market share to Internet Explorer’s 2.47 percent. In mobile operating systems, tablet and phone, Google’s Android has a market share of 51.07 percent to 2.51 percent for Windows. And, according to another research company, IDC, last year Android’s market share in
handsets was 81.5 percent and Windows’ 2.7 percent.

Looking ahead, Chennai-born IIT-Kharagpur graduate Pichai’s Google has a firm grip on advertising and search, and a lead in mobile operating system, which it will have to retain and build. Hyderabad-born Manipal Institute of Technology alumni Nadella’s Microsoft has to keep the lead in desktop and laptop operating system and productivity software markets.

But in cloud productivity, where subscribers use programs like wordprocessing and email on an external server and store data there, which is the emerging area slowly eclipsing traditional computing, they are both running head-to-head. According to Bitglass, a research company quoted in The Wall Street Journal earlier this year, Microsoft Office
365 and Google Apps for Work were each used in 16 percent of the organisaitons surveyed and another 29 percent said they would consider Office 365 against only 13 percent for Google’s Apps.

Breaking out in cloud productivity is crucial for Google to diversify its revenue stream from the dominance of advertising. For Microsoft, even though it’s more diversified, mobile computing is the area of challenge to keep up with the changing nature of computing.

In realigning their business strategies, they are also taking leaves from each others’ playbook. Google is going for a paid model for Apps for Work, while Microsoft is giving away its Windows 10, though only to owners of the two previous versions.

Pichai faces a bigger challenge within his corporate set-up, unlike Nadella who is more autonomous. Pichai’s Google works under the umbrella of the holding company, Alphabet, which expects him to fund its long-term technology and biotech ventures from Google.

In the case of Microsoft, there was a generational shift when the torch was passed from men in their 60s to 47-year-old Nadella. His predecessor Steve Ballmer was one of the earliest employees of the company, who in turn succeeded founder Bill Gates.

Gates gave up the chairmanship of Microsoft, when Nadella took over last year, and John Thompson, a 65-year-old African American, became the chairman and has more of a hands-off role as he is the CEO of his own company, Virtual Instruments. This leaves Nadella with more autonomy.

In the much younger Google, it’s shifts within the same generation. Forty-three-year-old Pichai succeeds Larry Page, the co-founder of Google who is in fact a year younger. Sergey Brin, the other co-founder, is two years younger than Pichai. Page, as CEO of the holding company, Alphabet, and Brin as its president, may want to reach for the sky
leaving the mundane affairs of Google, but they would still be the top authority above Pichai at barely an arm’s remove from him and young enough to pitch right back in.

Both Pichai and Nadella have also to look over their shoulders at Facebook, Amazon and Apple that are making inroads into their areas of dominance.

The Chennai-Hyderabad rivalry is not, in the final analysis, gladiatorial. They can carve out their niches for dominance, while overlapping in others.

(Arul Louis is a New York-based journalist and analyst. Financial disclosure: The writer owns stocks directly in Google and through mutual funds in Microsoft)