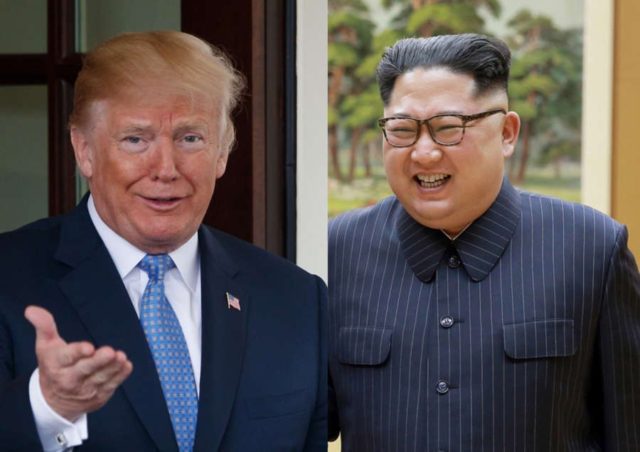 The Southeast Asian city-state has been the preferred location among US officials, who saw its neutrality as an advantage over locations closer to Pyongyang….reports Asian Lite News

US officials have been instructed to move forward with plans to convene a historic summit between President Donald Trump and North Korean leader Kim Jong-un in Singapore, the media.

The decision is ultimately up to Trump, who said on Wednesday he would announce the time and location in three days, reports CNN.

Speaking to reporters at the White House, Trump on Wednesday ruled out the demilitarized zone (DMZ) that divides North and South Korea as a potential location for the talks with Kim.

Singapore and the DMZ are the only two places Trump has floated in public as potential venues for the meeting.

The Southeast Asian city-state has been the preferred location among US officials, who saw its neutrality as an advantage over locations closer to Pyongyang.

Speaking during a briefing on Wednesday, White House press secretary Sarah Sanders affirmed that a date and site had been determined.

“I can tell you that a date and location are set but beyond that, I don’t have any other announcements at this point,” Sanders said.

“But we expect that to be announced here in the next few days.”

The meeting would be the first ever between a sitting US President and a North Korean leader, reports CNN.

Singapore has long been seen as a gateway between Asia and the West, and today remains a close ally to Washington and also hosts a US military presence.

It is also one of just 47 countries to host a North Korean embassy.

Even as Trump on Wednesday sought to heighten expectations for his summit, he acknowledged that the plans could fall apart.

But, he repeated, “lots of things can happen. And, of course, you’ll be the first to know about it if it fails”.

He added that on Thursday morning, he will travel to an airbase outside Washington D.C., along with Vice President Mike Pence to welcome the three US citizens – all with Korean heritage – recently released from prison by North Korea as a goodwill gesture.

The three Americans — Kim Dong-chul, 64, Kim Sang-duk, 58, and Kim Hak-song, around 60 — who had been held prisoners in North Korea, were all born in South Korea but later acquired US citizenship.