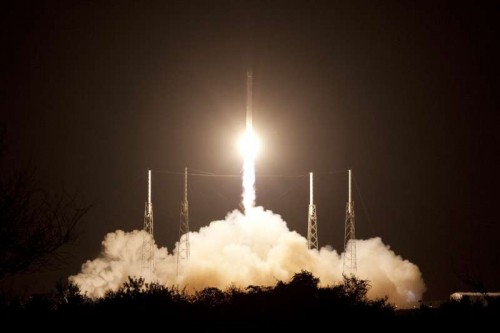 A loud whoosh, a faint smoke trail and billowing parachutes marked the successful demonstration by SpaceX of its Crew Dragon spacecraft abort system – an important step in NASA’s endeavour to launch crews to the International Space Station (ISS) from US soil.

The test of the spacecraft’s launch escape capabilities proved the spacecraft’s ability to carry astronauts to safety in the unlikely event of a life-threatening situation on the launch pad, the US space agency said in a statement.

“This is a critical step toward ensuring crew safety for government and commercial endeavours in low-Earth orbit,” said Kathy Lueders, manager of the NASA’s Commercial Crew Programme.

Crew Dragon is set for its first human missions in 2017.

During the test, the Crew Dragon simultaneously fired its eight SuperDraco engines and leapt off a specially built platform at Cape Canaveral Air Force Station’s Space Launch Complex 40 in Florida.

The engines fired for about six seconds, instantly producing about 15,000 pounds of thrust each and lifting the spacecraft out over the Atlantic Ocean before jettisoning its trunk, as planned, and parachuting safely into the ocean.

The test lasted about two minutes from engine ignition to splashdown.

The flight test is a vital milestone to meet a major requirement for the next generation of piloted spacecraft – an escape system that can quickly and safely take crew members away from their rocket while on the pad and through their ascent to orbit.

SpaceX can use the test data to help refine its aerodynamic and performance models, and its design, to help ensure crew safety throughout all phases of flight.

The test was the first with a full-size developmental spacecraft using a complete set of eight SuperDraco engines in the demanding real-world conditions of a pad abort situation.

NASA is preparing the ISS for commercial crew spacecraft and the larger station crews that will be enabled by SpaceX’s Crew Dragon and Boeing’s CST-100.

NASA plans to use the new generation of privately developed and operated spacecraft to carry as many as four astronauts each mission, increasing the station crew to seven and doubling the amount of science that can be performed off the Earth.