Tech giants, including Apple, Microsoft, Google and Facebook, have unanimously criticised the decision by Donald Trump’s administration to rescind the DACA programme that had potentially put 800,000 illegal immigrants at danger of deportation….reports Asian Lite News 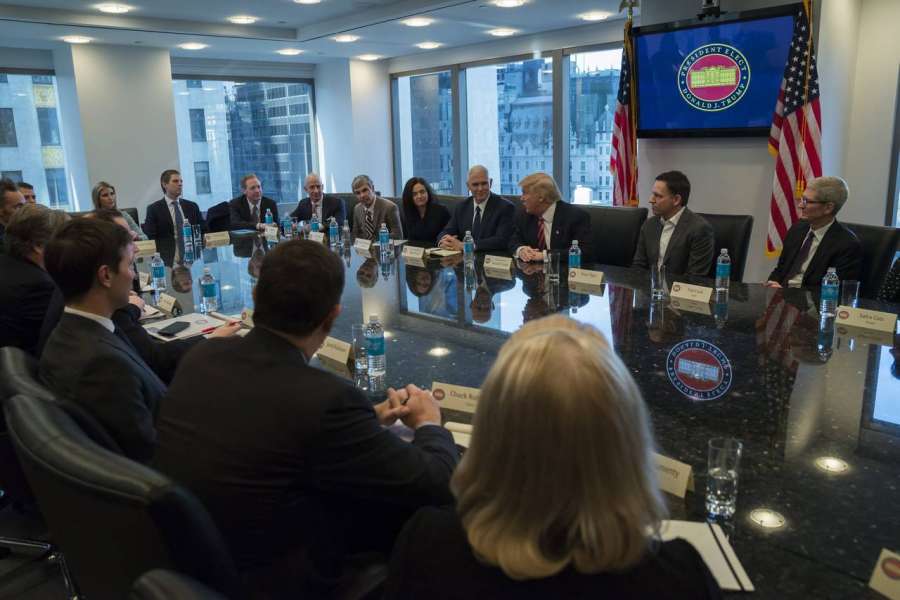 “I’m here today to announce that the programme known as DACA that was effectuated under the Obama administration is being rescinded,” Xinhua news agency quoted US Attorney General Jeff Sessions as saying on Tuesday.

Sessions said the Deferred Action for Childhood Arrivals (DACA) programme was “implemented in 2012 and essentially provided a legal status for recipients or a renewable two-year term work authorization and other benefits”.

His announcement came after Trump on Tuesday called on the Congress to take action to address the issue.

While Apple and Microsoft have offered defence to their “Dreamers”, Facebook CEO Mark Zuckerberg said, “This is a sad day for our country.” Google CEO Sunder Pichai asked the “Congress to act now”.

“On behalf of the hundreds of employees at Apple whose futures are at stake, on behalf of their colleagues and on behalf of the millions more across America who believe, as we do, in the power of dreams, we issue an urgent plea for our leaders in Washington to protect the Dreamers so their futures can never be put at risk in this way again,” ReCode quoted Apple CEO Tim Cook as saying.

Microsoft President and Chief Legal Officer Brad Smith said the company was deeply disappointed by the administration’s decision and they believe this was a big step back for the country.

“If Congress fails to act, our company will exercise its legal rights properly to help protect our employees. If the government seeks to deport any one of them, we will provide and pay for their legal counsel,” Smith wrote, of the 39 Dreamers who work at Microsoft, in a blog post shortly after the decision was announced.

The administration has given the Congress six months to replace the DACA with a new legislation.

Google echoed Microsoft’s comments and its Indian-origin CEO tweeted: “Dreamers are our neighbours, our friends and our co-workers. This is their home. Congress needs to act now to #DefendDACA. #WithDreamers.”

Asserting that the decision to end DACA is not just wrong, Facebook CEO said: “It is particularly cruel to offer young people the American Dream, encourage them to come out of the shadows and trust our government, and then punish them for it.”

“It’s time for Congress to act to pass the bipartisan Dream Act or another legislative solution that gives Dreamers a pathway to citizenship,” he wrote on his Facebook page.

“Our team at FWD.us has been working alongside Dreamers in this fight, and we’ll be doing even more in the weeks ahead to make sure Dreamers have the protections they deserve,” he added.

Meanwhile, tech giants like Amazon, AT&T, Lyft, Tesla, Uber and hundreds of other companies joined Facebook in a letter from Fwd.us — a political group created by Zuckerberg — in extending support to DACA and the Dreamers.

Other big tech companies, including Oracle and Intel, appear so far to be silent on the administration’s move, ReCode said.