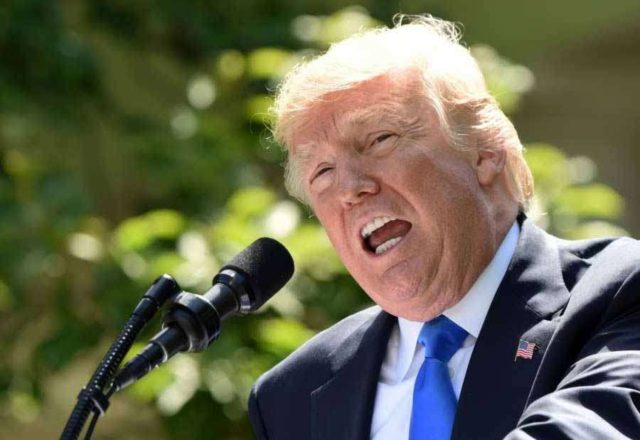 I cannot imagine how much further America’s reputation will decline as an increasing number of countries, including our allies, have resigned themselves to the lack of American leadership under Trump’s watch, which will have major adverse repercussions on our national interest and influence the world over….writes Dr. Alon Ben-Meir

Only one year after Trump was inaugurated, the US has already suffered an alarming setback to its global leadership role and badly damaged its image. In short order, Trump managed to bewilder our friends and allies, intensify the enmity between us and our foes, and evoke fear, concerns, and unpredictability to the dismay of the international community. I cannot imagine how much further America’s reputation will decline as an increasing number of countries, including our allies, have resigned themselves to the lack of American leadership under Trump’s watch, which will have major adverse repercussions on our national interest and influence the world over.

Trump’s ‘America First’ notion, abandonment of our soft power, and reckless utterances have deeply troubled countries with strong ties to the US, enraged those who have been maligned by his reprehensible rhetoric, and delighted our adversaries, while leaving America increasingly isolated.

On the issue of North Korea’s nuclear weapons and anti-ballistic missiles, instead of engaging Pyongyang in quiet diplomacy to resolve the conflict, he resorted to bellicose rhetoric and threats that only heightened tensions and brought the US and North Korea ever closer to the unthinkable—nuclear war.

On the Iran deal, rather than trying to peacefully negotiate any changes, especially to the sunset provisions, Trump decertified the deal and threatened to resume old and impose new sanctions, which would torpedo it completely. He demanded that Congress modify the deal, even though the other five signatories to the accord vehemently reject any tampering of the deal because of Iran’s continued full adherence. Tehran rejects any changes, and threatened to withdraw from the deal and resume its nuclear program, which could lead to the proliferation of nuclear weapons and subject the region’s inhabitants to living in the shadows of nuclear conflagration.

On immigration, Trump’s racist attitude toward Muslims and people of color has severely undermined America’s unique image as a country of immigrants, which made America great in the first place. His reference to Africa, Haiti, and El Salvador as “shithole” countries provoked unprecedented international outrage.

Scores of American Ambassadors around the world were summoned to explain the inexplicable, which the Ambassadors themselves could not fathom. Why would a sitting US president utter such filth, in the White House no less? Former Massachusetts Governor Mitt Romney put it succinctly when he said: “What he [Trump] communicated caused racists to rejoice, minorities to weep, and the vast heart of America to mourn.”

As to international treaties and accords, Trump has completely disregarded our commitment to live up to such agreements. He insists on renegotiating the terms of NAFTA, and effectively withdrew from the Trans-Pacific Partnership (connecting the Americas with Asia and Australia). He pulled the US out of the Paris Climate Accord and withdrew from the United Nations Scientific and Cultural Organization (UNESCO), accusing it of having anti-Israel biases.

As a result, he acutely damaged America’s credibility, making many countries wary of entering into bilateral agreements with the US, as they can no longer trust his administration to live up to its commitments. This leaves a wide opening for our adversaries to fill the vacuum he created.

Trump has further shocked all democracies around the world with his incessant assault on the press. Though a few of his predecessors have occasionally ostracized the press, none has mounted such vile criticism. He accuses all media outlets (except for FOX News) of being the enemy of the people, claiming they are biased and spreading ‘Fake News’ to purposefully malign him and deride his policy initiatives.

Sadly, whereas America was seen as the beacon of freedom and democracy to be emulated, Trump is consciously undermining one of our central constitutional pillars—the free press—to the utter consternation of democracies around the world.

On the question of the US’ reliability, many countries who depend on America for their national security are worried about Trump’s real commitment to safeguarding their security. His criticism of NATO, which is the core of West European security, and his appeasement of Russia, which is viewed as the West’s staunchest enemy, raises questions as to where he would stand if they were threatened.

This concern is being expressed by our allies in the Middle East and Europe, which is further diminishing America’s role. Germany’s Chancellor Merkel expressed her misgivings, stating that: “The times when we could fully rely on others have passed us by a bit… we Europeans must really take our destiny into our own hands… We have to know that we must fight for our future on our own, for our destiny as Europeans.”

The fact that Trump lies as often as he breathes deeply troubles countries around the world because they can no longer take his word for granted on issues of major importance to them.

Trump seems to be totally oblivious to the reality that without American global leadership, which spans over seven decades, the world will be even more chaotic than today. Trump has no end-strategy for Syria, Iraq, and Afghanistan, nor the focus or interest in stemming the widespread, destabilizing violent conflicts and human rights abuses around the world.

It is sad that in the most recent Gallup poll ‘Rating World Leaders’, the US is ranked third, behind Germany and China (and just ahead of Russia). The damage that Trump has caused to American credibility and moral global leadership will not be readily repaired after electing a new president. It will take time and a president who is stable, politically skilled, and intellectually competent with vision and understanding of America’s pivotal role in the international arena before America’s global leadership can be restored.

The Republican party has become complicit in Trump’s mischiefs and misguided policies. It is now up to the Democrats to get their act together, regain control of the House and Senate, and shackle Trump before he causes irreparable damage to America’s global role and responsibility.