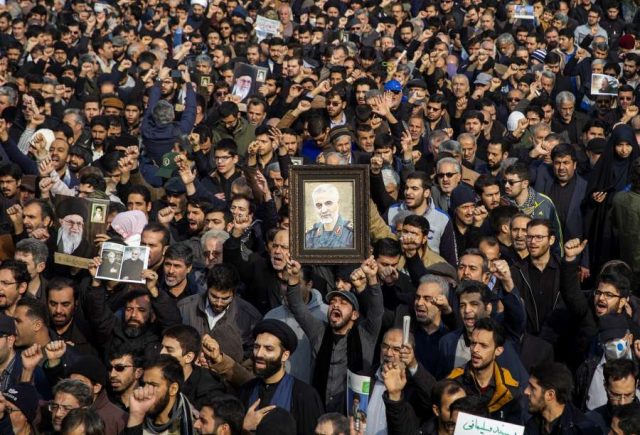 Due to the huge number of expected mourners, police were deployed in the area hours beforehand to control traffic and ask residents to remove their vehicles from the streets. Iranian Major General Qasem Soleimani led a mass prayer service, with high-ranking government and military officials also to attend the funeral…reports Asian Lite News

Hundreds of thousands of mourners, including Supreme Leader Ayatollah Ali Khamenei, gathered in Tehran on Monday to pay tribute to Iranian Major General Qasem Soleimani, who was killed in a targeted US drone attack in Baghdad last week.

From the early hours of Monday, Iranians walked toward the University of Tehran near Enghelab Square, where the funeral rites began among chants against the US and Israel, reports Efe news.

People in the funeral procession carried photographs of Soleimani, Iranian flags and banners with anti-US slogans.

While addressing the crowd, General Soleimani’s daughter, Zeinab, said: “The name Haj Qasem Soleimani is now shaking the nest of Zionism, Takfirism, and the order of hegemony.

“America and Zionism should know that my father’s martyrdom has awakened more human instincts on the resistance front. It will make life a nightmare for them and shatter their spider houses,” the Tehran-based Press TV reported.

Due to the huge number of expected mourners, police were deployed in the area hours beforehand to control traffic and ask residents to remove their vehicles from the streets.

The authorities have reinforced security measures in the capital, which helicopters have been flying over since Sunday afternoon.

Soleimani’s remains, along with those of Abu Mahdi al-Muhandis, the deputy leader of the Iraqi militia Popular Mobilization Forces who was also killed in the attack, arrived in Iran on Sunday.

Muhandis’s remains were brought to Iran where it will undergo DNA testing.

Funeral ceremonies were also held on Sunday in Ahvaz, the main city in the country’s eight-year battle against the forces of the former Iraqi dictator Saddam Hussein which shaped Soleimani’s future as an austere military tactician.

Later in the day, processions were also held in the holy city of Mashhad, which hosts the tomb of Imam Reza, the eighth Shia imam.

The funeral rites will continue on Tuesday in Soleimani’s southern hometown of Kerman, where his remains will be buried on Wednesday.

Soleimani, 63, was the elite Quds Force chief in charge of IRGC operations outside Iran, and has been on the ground in Syria and Iraq supervising militias backed by Tehran.

The Quds Force holds sway over a large number of militias across the region ranging from Lebanon to Syria and Iraq.

The Iranian authorities have called for “harsh revenge” over the killing of the commander and believe that the incident marks a turning point and will lead to the withdrawal of the US troops from the region. However, Washington has begun deploying hundreds more personnel to the region.

Amid threats of retaliation from Iran, US President Donald Trump on Sunday warned in a tweet that “the US will quickly and fully strike back, and perhaps in a disproportionate manner”.