Trump took to Twitter to share the development, saying: “Mike Pompeo, Director of the CIA, will become our new Secretary of State. He will do a fantastic job! Thank you to Rex Tillerson for his service!

Gina Haspel — Deputy Director at the Central Intelligence Agency — will succeed Pompeo, becoming the first woman to run the spy agency, if confirmed. Both she and Pompeo would need confirmation by the Senate to take their respective positions.

“Gina Haspel will become the new Director of the CIA, and the first woman so chosen. Congratulations to all!” Trump tweeted.

Tillerson found himself repeatedly at odds with Trump on a variety of key foreign policy issues. A senior administration official said the President made the decision to replace Tillerson in order to have a new team in place in advance of the upcoming summit and trade negotiations with North Korean leader Kim Jong-un.

The President last Friday asked Tillerson to step aside and the embattled diplomat, who was touring Africa, cut short his trip on Monday to return to Washington. At the time, the State Department said he was not feeling well, the US media reported.

Later, Tillerson diverged from the White House this week in saying that poison used on a former spy in the UK “came from Russia”.

The policy rift emerged sharply over North Korea when Trump tweeted in October that Tillerson was “wasting his time” trying to negotiate with Pyongyang to end its nuclear and missile programmes.

Tillerson had also publicly distanced himself from the President’s defiant response to violence at the white supremacist rally in Charlottesville, Virginia, last year.

The President on Tuesday thanked Tillerson for his service. He said Pompeo will do a “fantastic job” and “is the right person for the job at this critical juncture”.

The Army veteran and former Congressman will “continue our programme of restoring America’s standing in the world, strengthening our alliances, confronting our adversaries, and seeking the denuclearisation of the Korean Peninsula”, Trump said.

“I am deeply grateful to President Trump for permitting me to serve as Director of the CIA and for this opportunity to serve as Secretary of State,” Pompeo said in a statement. 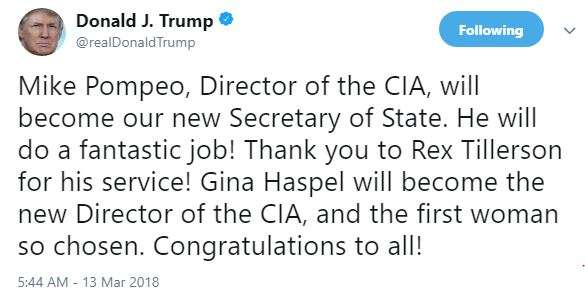 “His leadership has made America safer and I look forward to representing him and the American people to the rest of the world to further America’s prosperity. Serving alongside the great men and women of the CIA, the most dedicated and talented public servants I have encountered, has been one of the great honours of my life.”

Haspel in a statement also said she was excited for her promotion and said she was “grateful to President Trump for the opportunity”.