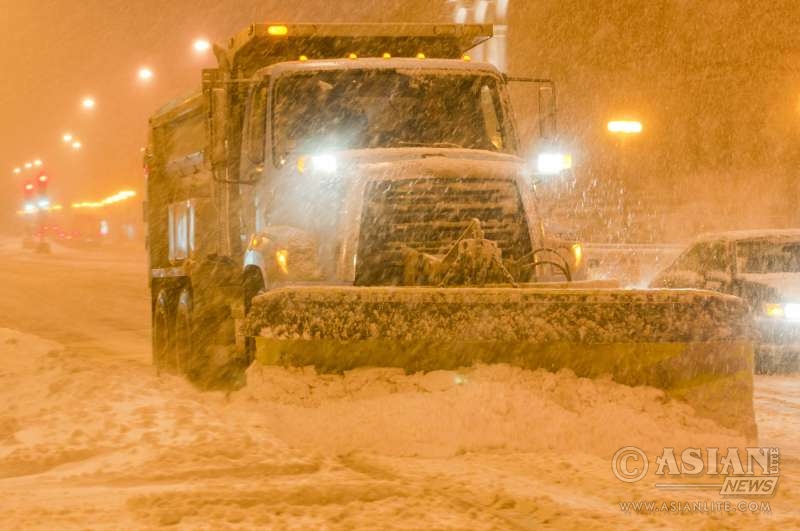 US East Coast braced Friday for a winter blizzard of epic proportions with about 75 million people in the storm’s path and the American capital right in the bull’s eye. Preparing for what people are calling “Snowmaggedon 2016” that could bring up to 30 inches of snow to Washington starting Friday afternoon and into Saturday night, schools and colleges across the region announced closures.

Fearful of the coming blizzard, lawmakers took early flights out of town and the region’s mass transit system took the rare step of announcing it would shut down for the weekend.

The governors of Pennsylvania, Maryland, Virginia, North Carolina and Georgia declared states of emergency Thursday, as did the Mayor of Washington.

All urged people to stay off the roads and stock up on food and emergency supplies as a relatively light dusting Wednesday left an unprepared Washington metro area a slippery mess along mostly untreated roads Thursday morning.

Even President Barack Obama’s motorcade was caught in the gridlock as his motorcade using hazard lights Wednesday made its slippery way from Joint Base Andrews to the White House.

“Heavy snow and blowing snow will cause dangerous conditions and will be a threat to life and property,” the National Weather Service warned.

“Travel is expected to be severely limited if not impossible during the height of the storm Friday night and Saturday.”

With 7 to 15 inches of snow forecast by the end of the weekend in New York, the city’s mayor Bill de Blasio has ordered some 4,800 sanitation workers charged with clearing streets to go on to 12-hour shifts Friday.

Ahead of the expected storm, airlines have begun to cancel flights from Washington area’s three airports.

Nearly 2 feet of snow fell in February 2010’s “Snowmageddon” storm, which cut power to hundreds of thousands in the region.

But it still fell short of the calamitous “Knickerbocker Storm” of 1922, which dumped 28 inches and killed nearly 100 people when the roof of a theatre by that name collapsed under the weight of snow, according to CNN.