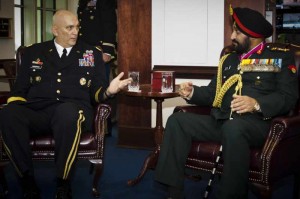 The US Army Corps of Engineers has offered India its expertise in fields ranging from water resource management to research and development, environmental issues and construction of facilities for soldiers and civilians.

“I think it’s a wonderfully advanced country in many respects, and their engineers are some of the brightest, I think, in the world,” Lt Gen Thomas Bostick, Commanding General and Chief of Engineers for the US Army Corps of Engineers said Thursday.

“So I think where we can best help is where India feels it has a need,” he said briefing foreign media on the corps’ operations in the Asia Pacific region.

“For India it’s really their decision or any other country to advise on what they can provide.”

Bostick, who has travelled to India though not in his official capacity and “studied with a lot of engineers from India” listed among his corps’ strengths “great water resource management expertise,” research and development, work on environmental issues besides construction.

“So any one of those areas,” he said. “I think that the first step is probably to continue to have the dialogue with countries to see where needs may not be met and if those needs can be met by an organization like the Corps of Engineers.”

Currently, the Corps is managing the construction of a bed-down facility for the Indian Air Force Station Hindon, in Ghaziabad for the Boeing C-17 Globemaster III military transport aircraft as also assisting India with the procurement of infrastructure for them.

The construction of the facilities began in 2012, and Bostick expected to have them completed by the year 2016.

India has contracted to buy ten C-17s. Five of them have already been delivered and five more are expected to be delivered this year.

“However, our capabilities extend beyond construction management and foreign military sales,” he said.

Bostick said he planned to visit India, but a general officer interacts regularly with the countries in the Asia-Pacific region “and has a good relationship with the leaders that he would normally interact with in India.”