US Secretary of State Mike Pompeo said on Wednesday that he was confident that through “concerted effort”, India and the US can protect their interests in the face of China’s “unacceptable behavior”.

Pompeo, who was in Denmark, spoke remotely to the US-India Business Council Ideas Summit. He said, “The recent clashes initiated by the PLA (People’s Liberation Army) are just the latest examples of the CCP’s (Chinese Communist Party’s) unacceptable behaviour. We were deeply saddened by the death of 20 Indian service members.”

“I am confident that because of our concerted effort, we can protect our interests,” he said.

He added, “I’m happy to report that India is a rising US defence and security partner in the Indo-Pacific and globally.”

Pompeo’s unequivocal support for India and condemnation of China was in contrast to Trump’s recent wavering stand on last month’s conflict in the Galwan Valley in eastern Ladakh.

Pompeo has been the face of the US campaign against China on security and diplomatic issues, trying to line up countries on matters ranging from technology to aggressive behaviour in Asia, ranging from Bhutan and India to Taiwan and the Philippines.

On Tuesday, the State Department ordered China to shut down its consulate in Houston within 72 hours citing espionage and intellectual property theft.

In the latest incident, the Justice Department accused two Chinese nationals of trying to hack into the US computer systems to steal Covid-19 vaccine research.

Turning to trade, Pompeo said that India had the opportunity to benefit from the growing distrust of Beijing and bring in businesses and manufacturing from China.

“India has the opportunity to attract global supply chains away from China and reduce its reliance on Chinese companies in areas like telecommunication, medical supplies and others,” he said.

“India is in this position because it has earned the trust of many nations around the world, including the United States,” he said.

But he added, “India will need to encourage an environment that is more open to increase trade and investment. I know that’s possible because Indians and Americans share the spirit of hard-work and entrepreneurship and I’m confident our partnership is only getting stronger.”

“The private sector will be indispensable in overcoming the economic damage caused by the pandemic that began in Wuhan, China,” he added. 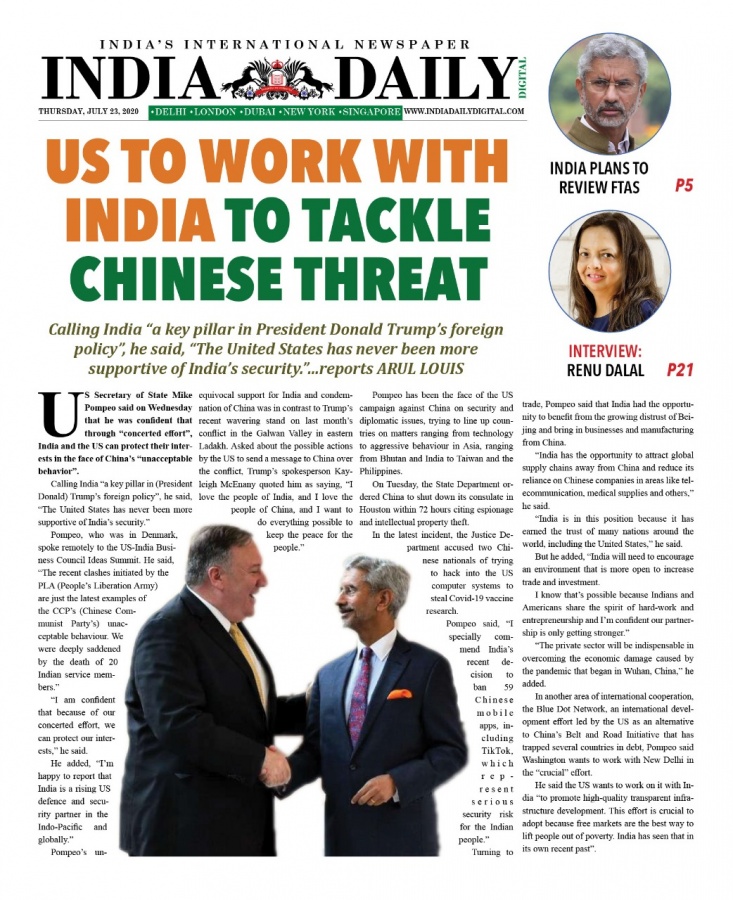 In another area of international cooperation, the Blue Dot Network, an international development effort led by the US as an alternative to China’s Belt and Road Initiative that has trapped several countries in debt, Pompeo said Washington wants to work with New Delhi in the “crucial” effort.

He said the US wants to work on it with India “to promote high-quality transparent infrastructure development. This effort is crucial to adopt because free markets are the best way to lift people out of poverty. India has seen that in its own recent past”.