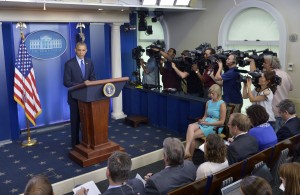 As the beheading of a second American journalist by the Islamic State (IS) terror group sent shock waves through the nation, US President Barack Obama authorised 350 additional troops be deployed to Iraq

The additional troops were being sent to protect American diplomatic facilities and personnel in Baghdad at the request of the US Department of State to beef up security, the White House said.

The new troops will bring the number of American troops in Iraq to well over 1,000, with most serving either as diplomatic security or military advisers to Iraq’s security forces battling IS fighters and their Sunni militant allies.

Although the announcement of new troop deployments came on the same day as the IS published a new video showing the beheading of American journalist Steven Sotloff as as a “second message to America” to halt airstrikes in Iraq, the two did not appear linked.

In the video posted Tuesday online, Sotloff, 31, a Florida-based freelance journalist who had gone missing in northern Syria over a year ago, says that he is “paying the price” for Obama’s decision to strike IS targets in Iraq.

According to the SITE Intelligence Group, the video shows the execution of Sotloff by what appears to be the same masked jihadist who killed fellow journalist James Foley, 40, exactly two weeks ago.

Sotloff appeared at the end of the ISIS video showing Foley’s execution, which warned that Sotloff would be the next to die if the US continued airstrikes against the militant group in Iraq.

The intelligence community in the United States is working to confirm the authenticity of the video, and the journalist’s family was waiting for that formal authentication that Sotloff has been killed, CNN said.

The killing raises difficult questions for Obama, who last Friday said he had not yet formulated a strategy for using military force against the militants in Syria, the New York Times commented.

As news of Mr. Sotloff’s death broke on Tuesday afternoon, just before Obama left for a weeklong trip to Europe and a NATO summit meeting, the White House struggled to deal with the implications for his policy.

The influential US daily cited White House officials as saying Obama remained cautious about military strikes in Syria, and that he was focused for now on developing a strategy and assembling a broad coalition of countries to deal with ISIS, one of several combatants in Syria’s three-year-old civil war.

“But the harrowing images of Americans with knives to their throats has given the threat from ISIS an emotional resonance and stoked calls on Capitol Hill and elsewhere for Mr. Obama to act more boldly,” it said.

Among those seeking a more muscular response was Louisiana’s Indian-American Governor Bobby Jindal, a potential 2016 Republican presidential candidate, who accused Obama of lacking a foreign policy altogether, according to MSNBC.

“I have no doubt about the President’s sorrow over the two murders of American citizens by ISIS,” said Jindal in a statement. “I am certain that this grieves him deeply. And while grieving is important, it is no substitute for a strategy.”

Sotloff brings the number of journalists killed in Syria to at least 70, according to the Committee to Protect Journalists.

More than 80 have been kidnapped in Syria since the civil war began, with many going unpublicized, the group said condemning “in the strongest terms possible the murder of journalist Steven Sotloff.”