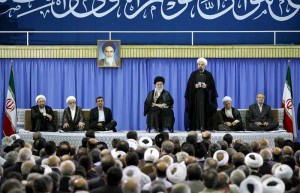 “Iran believes that people and government as well as religious leaders of Iraq can end the adventurism,” IRNA cited Khamenei as saying during a meeting with top Iranian judiciary officials.

Blaming the western countries for fomenting the current humanitarian crisis in Iraq, the country’s Supreme Leader said the western hegemonic powers, especially the US, try to abuse ignorance and prejudice of a group of willful elements.

“The US is not pleased with the current situation in Iraq… because the US wants to dominate Iraq and have its agents rule over the country,” Khamenei said, while referring to an Iraqi parliamentary election in April that chose Prime Minister Nouri al-Maliki.

Reacting to the US officials’ comment that portray Iraq issue as a religious war, Khamenei said: “What happened in Iraq is not a Shia-Sunni war, rather it is because a hegemonic system wants to use remnants of Saddam regime as main elements and the Takfiri prejudist elements as pawns so as to stir unrest and conflict in Iraq and threaten the country’s territorial integrity.”

“The main conflict in Iraq is between those who are seeking Iraq’s independence and those who favour Iraq to join the US camp,” he said, stressing that “Iran opposes the US and others’ interference in Iraq and does not endorse it”, the IRNA report said.

Iran has denied that it will send any military forces to help the Iraqi government in its fight against the Islamic State of Iraq and the Levant (ISIL), even as Iranian President Hassan Rouhani said last week that Iran would do everything to protect Muslim Shiite shrines in Iraq.

Last week, US President Barack Obama ruled out a return of US troops in a combat role in Iraq though he agreed to send 300 military advisers to assist Baghdad.