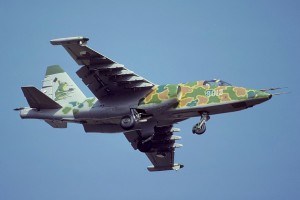 Iraq has received the first batch of fighter jets it ordered from Russia to help fight Sunni insurgents, the Iraqi defence ministry said.

BBC quoted the ministry as saying that five Sukhoi Su-25 attack aircraft would enter service in “three to four days”.

The deal with Russia “was aimed at increasing the firepower of the air force and the rest of the armed forces in order to fight terrorism”, the ministry said.

The insurgents control large swathes of the north and west of Iraq after they started marching over the past three weeks.

On Saturday, the government said it had retaken the northern city of Tikrit but the rebels dispute this.

Prime Minister Nouri al-Maliki told the BBC last week that his government had signed a deal with Russia and Belarus to supply jet fighters.