Israeli Prime Minister Benjamin Netanyahu said that one of the challenges facing the upcoming government would be handling Iran’s nuclear programme.

“A conciliatory (move) with Iran would prove out to be a mistake that would cost a very heavy price,” Netanyahu said in a speech in the Knesset commemorating 70 years of the Allied Forces’ victory over Nazi Germany in 1945.

Netanyahu said there would be many diplomatic, military and economic challenges in front of the upcoming government, but “coping with the Iranian threat would be a central theme”, Xinhua news agency reported.

“Iran’s efforts to manufacture nuclear weapons, along with its long history of spreading terror throughout the Middle East, force us to decisively protect our sovereignty and security,” he added.

Netanyahu is a hardliner regarding the issue of nuclear Iran, saying that if Iran were to be armed with nuclear abilities, it would pose an “existential threat” to Israel. He demanded Iran should forego all of its abilities to enrich uranium.

Whereas Netanyahu warns the dangers of a nuclear Iran, Iranian officials stress that the country’s nuclear programme is aimed at peaceful purposes.

Netanyahu and other Israeli officials slammed both the interim agreement (from November 2013) and the final framework agreement (from April this year) between Iran and the P5+1 group of major world powers comprising China, the US, Britain, France, Russia plus Germany with a final agreement expected to be inked by June 30.

Israeli officials have in the past hinted at the possibility of airstrikes against Iranian nuclear facilities in case “Israel would be forced to defend itself”. 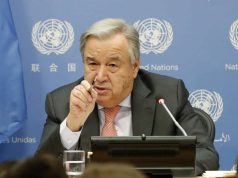