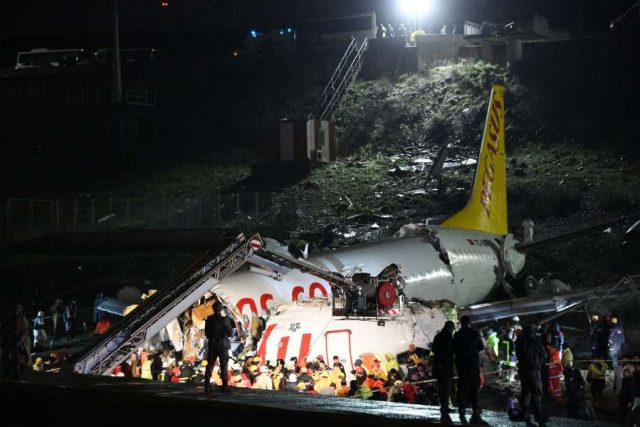 Three people were killed after a Turkish passenger aircraft skidded off the runway after landing and broke into three peices, the country’s Health Minister said on Thursday.

“According to the information we obtained, after the hard landing, the plane drifted,” Transportation Minister Cahit Turhan said,.

The majority of passengers were Turkish, although local media said at least 22 were foreign nationals from 12 different countries.

Istanbul Governor Ali Yerlikaya said the plane skidded off the runway and then drifted for about 50 metres before falling from 30 meters and breaking into three pieces.

Authorities have launched an investigation to examine the black box of the 10-year-old aircraft and determine the details of the accident.

This is not the first time the airline has been involved in accidents of such nature.

The crash comes less than a month after another Pegasus Airlines Boeing 737 overran the runway at the same airport.

Passengers in the plane, inbound from Sharjah in the United Arab Emirates, were unharmed in the Jan. 7 incident.

In 2018, the same accident took place with the same aircraft model, this time at Trabzon Airport, as it landed from Turkey’s capital Ankara. The airplane overran the runway and came to a halt at the bottom of a cliff just short of plunging into the sea below. There were no casualties.

The low-cost airline has a fleet of 87 planes and has been in operation for 20 years.

The Sabiha Gokcen Airport in Kurtkoy on the Asian side, which is the smaller of the two international airports in the capital city, has resumed normal operations.