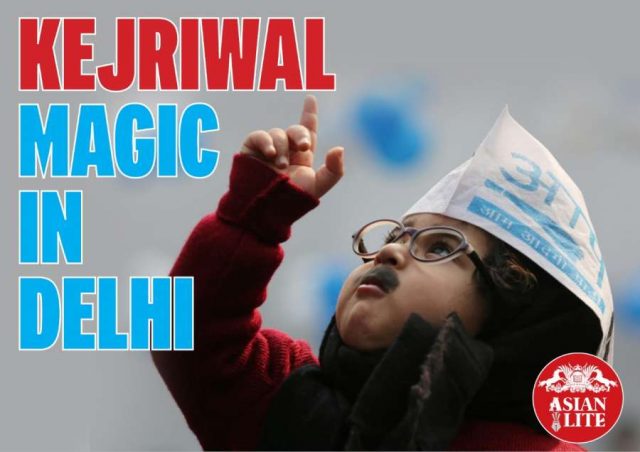 After Delhi win, AAP hints at going national. AAP Delhi chief Gopal Rai: “The way you celebrate love in Delhi, it gave a new definition of patriotism that involved working for the common man. A new kind of nationalism was born here which speaks about common man and improvement in their living standards” …. reports Asian Lite News

As the Aam Aadmi Party swept the Delhi Assembly polls, the party gave hints of taking its politics at the national level.

He said in Hindi that “‘Baat nikli hai toh dur talak jaigi’ (We will go a long way).”

Rai said this politics of change will not be just limited to the national capital.

“The way you celebrate love in Delhi, it gave a new definition of patriotism that involved working for the common man. A new kind of nationalism was born here which speaks about common man and improvement in their living standards.”

Rai said Arvind Kejriwal has declared that whenever there is a fight between hate and love, hate was defeated.

“The entire nation was watching, they (BJP) were trying to spread hate. But Delhi proved the city has love in its heart.”

Rai said it was felt that the BJP will do anything to form a government but “I want to say the way Delhi has shown love, that love will not just continue in Delhi in the coming five years but will also spread across the country.”

He added people used to say, what can AAP do. “But Delhi stood with us as we changed the politics.”

Rai said BJP put so much effort as if it was out to win not just an Assembly election but the whole world.

“All the BJP leaders, and Prime Minister, Home Minister and other Union ministers were spreading hate. I salute Delhi that it gave a message.”

Rai said the “end” of those spreading hate has started from Delhi.

“Delhi gave a message to the country that the end of those doing politics of hate has started from here.”

Rai said the next five years will be better. “We will make Delhi the first state which will gave its people a guarantee.”

“I salute all booth and ward-level volunteers. It is their efforts which gave us this victory.”

“The same children of Mother India live across the country. So, what Delhi is doing can be done in other states as well,” he said.