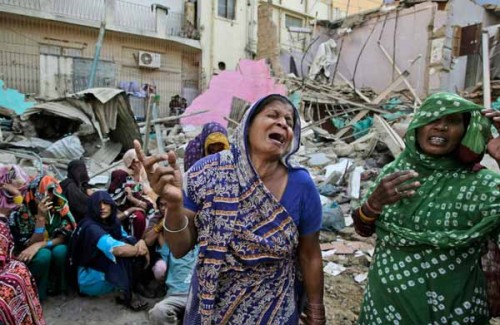 In the latest incident of its kind, a Hindu temple was attacked by fanatics in Pakistan, the temple was torched, the stone idol of Lord Hanuman blackened with soot, and some religious books burnt.

This attack Nov 21 on the Hindu temple in the Tando Mohammad Khan area in Sindh – and reported in the Dawn newspaper – is however, not a one-off incident in a country where such attacks are increasingly turning out to be the rule, rather than an exception.

With a population of around seven million, Hindus form the largest religious minority group in Pakistan, which, at 195 million, is the second largest Muslim nation in the world after Indonesia.

In a similar attack March 28 this year, a small Hindu temple was torched near Fateh Chowk in Hyderabad, Sindh, triggering widespread protests by the Hindu community.

Only a couple of weeks before that, a dharamshala, or a pilgrims’ rest-house, was set ablaze and some statues of Hindu deities in an adjacent temple in Larkana were damaged to protest the alleged desecration of the Islamic holy text Quran.

The arson attacks on Hindu places of worship are seen as attempts to fan flames of communal violence.

All these incidents have been reported in the media, in the highly regarded Dawn newspaper, as well as by BBC and others.

Even the Jinnah Institute, a think tank, has chronicled these incidents.

The arson attacks on Hindu temples and other incidents of religious intolerance have made the Hindu community in Pakistan nervous, according to media here.

With kidnappings and forced conversions of teenage Hindu girls, abduction of Hindu traders for ransom, and desecration of temples, many Hindus have been forced to migrate to India and elsewhere, Dawn reported in September this year.

“As a last resort, we have decided to migrate to India,” a Dawn report in November quoted a Hindu man in Sindh as saying.

“We are completely insecure here. We are looted, but our voice is not heard by the people in the saddle, our temples are attacked in broad daylight, but no one takes action, our girls are kidnapped and forcibly converted only to hear more empty promises of justice,” he said.

“Nothing happened in the last 65 years and we don’t expect any improvement in future. Things will only become worse,” he added.

“Minorities are still as vulnerable as they were one-and-a half years ago and to add to their misery, the land mafia is actively engaged in illegally occupying the religious places of the minorities, and kidnappings of Hindu girls are still happening,” said Chela Ram Kewlani of the Pakistan Hindu Council.

The Hindus are the most vulnerable in Pakistani society, wrote vice president of the Pakistan Hindu Seva Chander Kolhi in an article titled “Forced conversions — a peril for Hindus” in the Daily Times Friday.

“They are unable to educate their children and it is also difficult for them to have their children treated in government hospitals. In some localities, where girl children from the Hindu community are sent to school, they are abducted, raped or are forcefully converted at a minor age,” Kolhi stated.

The Pakistan Hindu Council had proposed the establishment of an active committee at the federal level under Prime Minister Nawaz Sharif to prevent atrocities against the minorities.

While the Pakistani statute books still carry laws from the colonial period that prescribe punishment for the desecration of religious places and articles, their enforcement has come to depend on how far a community is willing to go to make those laws work, a BBC report noted in December 2012.

The Pakistan Hindu Council said, after the Nov 21 attack on the Hindu temple in Tando Mohammad Khan, that around 1,400 Hindu religious sites across the country were in dire need of protection by the government.

Following this attack, Prime Minister Nawaz Sharif approved the setting up of a national commission on minorities to promote religious tolerance and harmony in the country, in accordance with the June 19 Supreme Court judgment on rights of minority communities.

While one hopes that the attacks on Hindu temples and other instances of intolerance against the Hindu minorities in Pakistan cease, only time will tell how far those hopes would be fulfilled.

However, till that happens, the Hindus in Pakistan continue to live a life on the edge.