It was just five years ago, Australia alienated from its natural ally the US to a greater extent so as to bond with rival China through its decision to  join the Asian Infrastructure Investment Bank (AIIB), one of Beijing’s most important foreign-policy initiatives. Although Australia received ‘free trade agreement’ in return, Canberra is now regretting hopping on China’s strategic voyage. The bilateral relationships have hit all-time low thanks to the economic and military coercion tactics being used by Xi Jinping-led Chinese government to punish Australia for demanding an independent investigation into the origins of the coronavirus. Concerned about possible armed offensive by Beijing, Australia now has decided to pour in additional USD 190 billion into its defence spending to strengthen its maritime defence potential as well as boost offensive cyber capabilities.

Australia hailed global support for independent inquiry into coronavirus origin, which was first recorded in China. Subsequently, Beijing took a slew of coercive measures as well as launched cyberattacks targeting companies, hospitals, schools and government officials in Australia. Citing the increased instances of cyber-attacks by Chinese hackers on critical infrastructure, the Australian government would be spending about USD 1 billion this year, which is 10 percent hike year-on-year basis.

China added anti-subsidy duties of 80 percent on Australian barley and banned beef from four major Australian exporters even as it began propaganda of racism in an attempt to make Canberra fall in line. All this has led to verbal battles between Chinese and Australian officials so far. However, Canberra is in no mood to remain aloof especially in the backdrop of Chinese incursions in India’s Ladakh region, where border standoff high up in Himalayas had created a war-like situation. China has been using its military and economic might in the East and South China seas to subjugate small countries in the region. All these developments have urged Canberra to at least improve its deterrence capabilities in case China uses military threats in near future.

The Lowy Institute, a reputed think tank with global outlook, has conducted a series of surveys to find what Australians think about Chinese and their intentions. In the last two years, the number of people believing China being more of an economic partner to Australia reduced significantly while those felt it being a security threat saw upward rise. 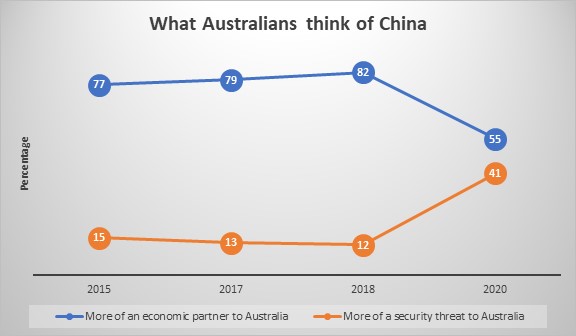 The Lowy institute also asked a set of people in Australia in 2019 about the economic and military relationships with China. Many expressed disagreements over China’s flagship the Belt and Road Initiative (BRI) and militarisation of the South China Sea. About 77 percent demanded Australian government to do more in order to resist China’s military activities even it affected the economic relationships. The percentage of people thinking this way increased by 11 percent since 2015.

Following the Chinese coercive actions, majority of Australians have sought their government to reduce their economic dependence on China as well as limit the scope of bilateral relationship. 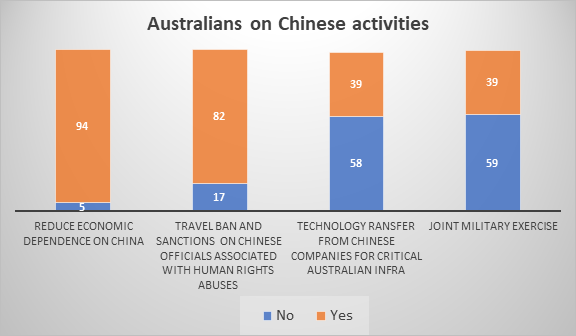 The USD 190 billion defence plan indicates that Australia getting serious about possible armed conflict in the Indo-Pacific region. In order to augment its maritime strike capability, Australia is set to procure long-range missiles including the US manufactured AGM-158C anti-ship missile, which has range of up to 370 km. Australian Prime Minister Scot Morrison said “The risk of miscalculation and even conflict is heightened. Regional military modernisation is at an unprecedented rate.”

Australia now has decided to approach Beijing with ‘eyes wide open’. The recently caused feud has seen Canberra not just restoring its ties with the US but going closer to India, a fierce enemy of China.  Morrison has termed the US as Australia’s most important security partner since World War II as well as being “the foundation of our defense policy”.

In early July this year, defence ministers of the US, Japan and Australia held a trilateral meeting to enhance security, stability, and prosperity in the Indo-Pacific region. In a clear message to China, these ministers in a joint statement warned against the use of force or coercion in South China sea as well as expressed opposition to any destabilizing or coercive unilateral actions that could alter the status quo and increase tensions in the East China Sea.

Australia has sought regional cooperation in Indian Ocean region and India is the most crucial link. Owing to shared distrust with China, both Australia and India have raised their bilateral relationship to a “Comprehensive Strategic Partnership” and the major takeaway of the upgradation is a mutual commitment toward maritime cooperation in the Indo-Pacific. Strengthening of a maritime alliance forged by two militarily strong nations in the Indian Ocean region can pose serious challenges to Chinese hegemony. The prospects of strong alliance seems clear as India is likely to include Australia in the Malabar exercises with Japan and the US.  It means positive development of the ‘Quad’ coalition, about which Beijing is quite apprehensive. Post, 2007, Australia withdrew from the Quad following objections raised by Beijing. However, Australia has been trying since 2015 to join the club and now it seems it will be included this year. The opportunity of military cooperation brings with it another opportunity of economic cooperation as Canberra seeks to reduce its economic dependence away from China while India intends to get a greater access to Australian goods and services.