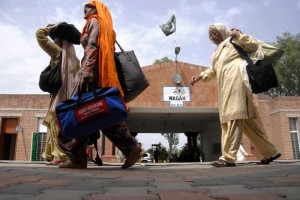 At least 45 people were killed and over 70 others injured in a suicide blast  evening near the Wagah border in Pakistan’s Lahore metropolis, police said.

Inspector General of Police Mushtaq Ahmad Sukhera said a suspected 18-year-old suicide bomber blew up his explosive jacket around 5.50 p.m. amid a crowd of people who were coming back after attending a flag hoisting ceremony at the border, Xinhua reported.

Two Pakistani security personnel were among those killed.

Earlier reports said it was a gas cylinder blast in a restaurant.

Police said at least five kg of explosives along with ball bearings were used in the blast.

Officials said the death toll may rise as many injured people were in critical condition.

Rescue teams and police rushed to the site and shifted the bodies and the injured to hospitals. They cordoned off the area and launched a search operation.