China adds one more Muslim community to the list of persecuted minorities. The government has destroyed domes and minarets on mosques, including one in a small village near Linxia, in a city known as “Little Makkah.”  Similar demolitions have been carried out in Inner Mongolia, Henan and Ningxia, homeland of the Hui, China’s largest Muslim ethnic minority ….. writes Rifan Ahmed Khan

China’s persecution of the Uighur minority in Xinjiang is well known, but its treatment of other minorities particularly Hui Muslims, is not so well known. Recently, media reports including the one from New York Times dated Sept. 21, 2019 have brought to the fore China’s treatment of its Hui minority population. This starkly brings out the scale and intensity of the crackdown in various forms. A survey of the recent reports indicates that this phenomenon is not restricted to Xinjiang alone, where the Uighurs have faced the brunt of Chinese State repression, but also in other parts of China where Muslims are resident. For instance, in China’s northwest, the government has destroyed domes and minarets on mosques, including one in a small village near Linxia, in a city known as “Little Makkah.”

Similar demolitions have been carried out in Inner Mongolia, Henan and Ningxia, homeland of the Hui, China’s largest Muslim ethnic minority. In the southern province of Yunnan, reports appeared of three mosques being closed by the provincial authorities. Furthermore, in Ningxia, public displays of the Arabic script, have been banned. China has also gone to the extent of removing the word “halal” from the official seal that is distributed to restaurants which follow Islamic customs for preparing food. The seals now use Chinese characters. That prohibition has spread to Beijing and elsewhere. Authorities in several provinces have stopped distributing halal certificates for food, dairy and wheat producers and restaurants.

The ‘Sinicization of Islam” in China is clearly not restricted to Xinjiang alone. What the Chinese state is trying to do is to assimilate the Hui, a Chinese-speaking people with no recent record of separatism or extremism. As noted by an observer: “The campaign targeting the Hui is a purge of ideas, symbols, culture, products, anything deemed not Chinese. It permeates life, in ways existential and mundane”.  The Hui, distant descendants of Persian traders, are under increasing pressure from the Chinese state, at a time when Beijing is stoking nationalism among the ethnic majority Han to bolster popular support. In officials’ speeches, on television and across billboards, one frequent refrain is the “China Dream” — Xi’s vision of restoring China’s historic power and wealth, its culture and its pride.

While none of the new measures adopted against the Hui, equal the brutality of Xinjiang’s mass detentions and invasive surveillance of Uighurs, they have stirred anxiety amongst the Hui, who number around 10.5 million. Concentrated in the Ningxia region, the Hui are China’s third-largest ethnic minority. As a whole, China has some 22-23 million Muslims, in a total population of 1.4 billion. 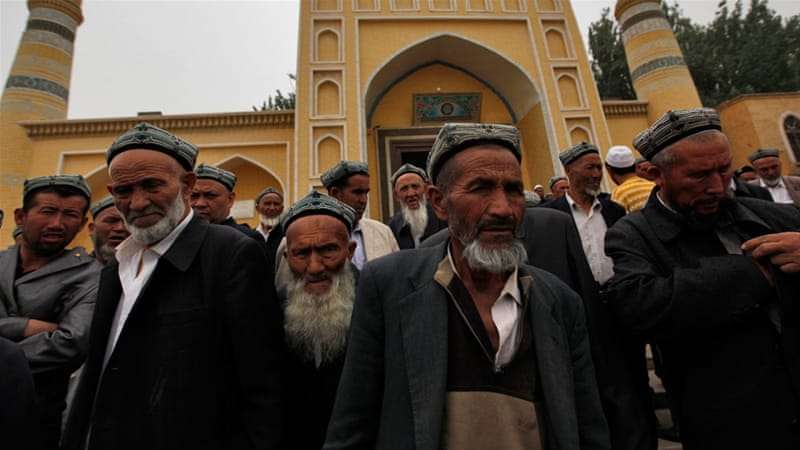 The measures taken against minorities in China reflect the hard-line policies adopted by President Xi Jinping who wants to reassert the primacy of the Communist Party and its ideology in all walks of life. More importantly, he wants every single citizen of China to follow him as the leader. The Chinese state explains this narrative in terms of its ‘fears’ that adherence to the Muslim faith could turn into religious extremism which in turn could threaten the security of the State. Consequently, across China, the Communist Party has been implementing new directions from the leader, Xi Jinping to restrict Islamic customs and practices.

In 2018, the Chinese State Council issued a directive titled “Reinforcing and Improving Islam Work in the New Situation.” This directive ordered local officials to prevent Islam from interfering with secular life and the state’s functions. While there is no official version of the directive available in the public domain, there is sufficient indication of its contents based on excerpts provided in open sources. To start with, the directive warns against the “Arabisation” of Islamic places, fashions and rituals in China.

The April 2018 directive of the Communist Party of China obtained by the ­Germany-based World Uighur Congress showed the Chinese central leadership instructing local authorities to reverse what it deemed to be growing “Saudi” and “Arab” influences in architecture, clothing, religious practice and language. It is interesting that it singles out the influence of Saudi Arabia, the home of Islam’s holiest sites, as a cause for concern, at a time when the Saudi Arabia-led OIC has sung praises for China’s handling of its Uighur Muslims, because of its vested interest i.e. trade.

The most visible aspect of the crackdown has been the targeting of mosques built with domes, minarets and other architectural details characteristic of Central Asia or the Islamic world. Symbolism has come to mean danger to China and therefore, the focus on architecture as a possible symbol of resistance to the Chinese state has become prominent. Further, the April 2018 directive prohibits the use of the Islamic financial system. It also bars mosques or other private Islamic organisations from organising kindergartens or after-school programmes, and it forbids Arabic-language schools to teach religion or send students to study abroad.

Ningxia and Gansu provinces have banned the ‘Aazan’, traditional call to prayer. Authorities have also targeted the mosques themselves. In Gansu, construction workers in Gazhuang, a village near Linxia, descended on a mosque in April 2019, tearing off its golden dome. It has not yet reopened. A video on social media shows workers taking apart the Gazhuang mosque’s golden dome then smashing it into the prayer hall.

In the Yunnan province, where Hui communities have long settled, authorities padlocked (December 2018) mosques in three small villages that had been run without official permission. There were protests and brief scuffles with police, to no avail. The county issued a statement accusing the mosques of holding illegal religious activities and classes. Two years ago, Yunnan suddenly stopped the Islamic tradition of ‘calls to prayer’, once broadcast from local mosques. Simultaneously, the sale of Quran’s in bookstores was also banned.

A perusal of China’s policy in the past towards its ethnic minorities shows that at one point in time, China was flexible towards these minorities. An article written by Hu Angang, and Hu Lianhe, in 2012, criticized the CPC’s handling of its minorities and warned that a similar system adopted led to the demise of the Soviet Union.  They called for an “upgrade” of the policies and pointed to a model that they thought China should consider: the United States. The two Hus warned that the twin dangers of “regional ethnic elites” and “regional ethnic interest” had increased the threat of ethnic separatism.

They, therefore, concluded that “Any nation’s long-term peace and stability was founded upon building a system with a unified race (a state-race) that strengthens the state-race identity and dilutes ethnic group identity”.  At that time, there was opposition from many Chinese scholars to this idea. But in the years that followed, violent incidents, which Chinese authorities said were carried out by Uighurs, helped draw support for hard line policies.

The very same Hu Lianhe, in August 2018 was therefore seen mounting China’s first international defence of the security crackdown in Xinjiang at the discussion on Xinjiang at the UN Committee on Racial Discrimination. “There are no such things as so-called ‘re-education’ centres in Xinjiang,” said Hu, an ethnic policy specialist at China’s United Front Work Department. Therefore, it is clear that China’s attitude towards its’ ethnic minorities has shifted over the years and in recent times more dramatically with regard to its Muslim minorities. This includes the Hui and Uighur Muslims who have inhabited China for a very long time. What is unfortunate is that what began as a ‘strike-hard’ policy in Xinjiang is today spreading to other parts of China and the consequences of such actions will only be known within China and not to the outside world due to the ban of world media in Muslim dominated regions.