An open letter by a group of Chinese intellectuals urging lawmakers to vote down a plan to drop the two-term limit for the President was circulating on social media on Tuesday.

The constitutional reform, if passed, will allow current Head of State Xi Jinping to be re-elected for a third term.

The open letter, circulating on WeChat, the Chinese equivalent of Twitter, was written by a group headed by Li Datong, former editor of the magazine Bingdian, and is addressed to 55 lawmakers who are set to vote on the proposal in March.

The group warned that voting in favour of the 14th amendment to the 1982 Constitution, which would allow Xi to continue his term as China’s president after 2023, would be a step backward in history and will sow the seed of chaos.

The letter argues that the two-term (10 years) limit set in the Constitution was aimed at discouraging personal dictatorship and disallow an individual to become more important than the party.

Li called on the Beijing lawmakers (a fraction of the nearly 3,000 lawmakers who are set to participate in the annual plenary session of the National People’s Assembly) to vote against the proposal.

The Communist Party of China’s Central Committee had proposed Sunday to do away with a two-term limit for the president and vice president of the country, to be voted and approved by the lawmakers at the end of the National People’s Assembly annual plenary session, which usually concludes by mid-March. 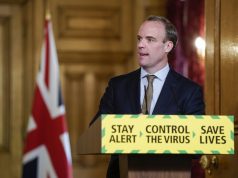