Facts are sacred and comment is free. It is now a business strategy to distort facts and spice up comments to win the race to gain more readers and score high TRP rates. Guardian angels of modern journalism may be banging their heads in shame after reading the page 2 of Times of India….writes Soumya R Krishna 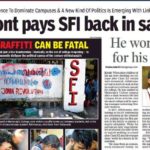 “Facts are sacred and comment is free.” That’s the corner stone of modern journalism laid by the great Guardian editor Charles Prestwich Scott aka CP Scott. That simple sentence implies what journalism meant for- honesty, cleanness, courage, fairness, a sense of duty to the reader and the community. But I am confused after reading the Page 2 of Times of India, the first day after the brutal killing of Abhimanyu at Maharajas College. When the whole world is in a shock over the murder of a rising star of student politics, a leading national newspaper is finding excuses to justify a cold-blooded murder. The guardian angels of modern journalism may be banging their heads in shame.

The headline appeared in the TIMES CITY page reads- “Campus Front pays SFI back in the same coin”. And a point to be noted is – it did not take place in the editorial page rather among the city news reports.

Journalistic objectivity may refer to fairness, factuality, and non-partisanship, but most often encompasses all of these qualities. -This is the general definition of “objectivity in Journalism”. One of the fundamental lessons we learn in journalism classes. The politics of a newspaper shall not be discussed until and unless the news published in it is seemingly biased. The pro-right principle that ToI follows was visible many times before. But now this time it crossed limits. A newspaper in any way should not be justifying violence. The heading was not only justifying but fuelling revenge among the youth. The entire article is nothing but a try to balance between the criminals and the victims. Even the “rights” can go wrong if discussed at the wrong place and time.

The views of the editor are supposed to appear in the Editorial whereas this report was part of the TIMES CITY page which is meant for “reporting“and not interpreting.  A newspaper ultimately is meant to inform and educate the society. The people handling the newspapers should be well aware about the power of their tool. This caused widespread protests in the social platforms. 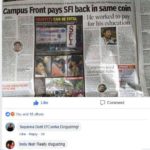 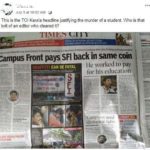 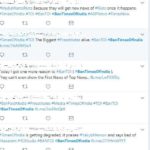 DR Sebastian Paul : “The “tit for tat theory” is performed by the Campus front and its parent organisation to justify the brutal murder of Abhimanyu. It is for their sake and they have to justify their action. But it’s unfortunate that the main stream media is also toeing that line. And it’s strange that the Times of India in its news pages put forward the theory of retaliation in self defence against SFI violence. The context of SFI in campuses may be a subject which requires introspection and critical analysis but this is not the time to do that exercise .This is done just for the purpose of white washing the dastardly violence of a brutal Organisation. The mainstream media should refrain from falling into that trap.“

Baiju Chandran: “Objectivity and fair play is the first chapter of every journalism theory textbooks. Unfortunately this same theory is missing in many of the national media since a decade. It was the cost for the entry of channels and their rating race. Now we are witnessing the alarming situation were the newspapers are also trying to follow this path. There were times when news is different from view. View should appear in the Edit page.  Times of India have taken sides many times before but in this case, the paper forgot even the humanitarian values. Headlines should not be dealt this irresponsibly by whoever did it. I remember the story N S Madhavan wrote “Thiruthu” (correction). The story well explains the importance of every word in headline. The act of Times of India is not only irresponsible but also misguiding.“

NP Rajendran: “Campus front pays SFI back in same coin’- “I had seen the TOI  heading that same day, which ‘provoked’ me to read the news report in full. I only felt contempt for the heading, not for the article. The heading is a justification for the cruel murder committed by the cowards of one of the quasi terrorist organisations,  that are creeping into our campuses. This can be a deliberate or foolish mischief of an ignorant journalist assigned to do subbing in the desk.

It is true SFI too resorts to violence in our campuses. There are innumerable instances of students of rival organisations being brutally attacked or even murdered. But, not one of them can be compared to what happened in Maharajas College the other day. Not one student was attacked or killed in Maharajas, and so there is no question of any one paying back in the same coin or a different coin.

Neither NM Pearson nor Simon Britto had accused SFI of provoking the Campus Front supporters, and causing a backlash like the one that took place there. Then what is the justification in the giving such a heading to that report? It is not just poor journalism but reckless politicking too, which no professional media institutional will tolerate.

I also object to branding these killer groups as mere fundamentalists. Fundamentalists with their belief in the so called fundamentals of their religion, are surely a threat to our secular democratic fabric, but they are not murderers. Popular/campus front groups are terrorists, who should definitely be thrown out our campuses.“

Sreejith Divakaran: “By the title given by ToI – “Campus Front pays SFI back in the same coin “their intention was not even to justify Campus Front but just apply their national RSS narrative to blame communists in every possible way. This is not journalism. It’s a criminal activity done using the money and power of Sangh Pariwar. It spreads hate. This is not an excusable subbing mistake, Once cpi-m is accused, they would call it left fascism and once cpi-m is at recieving end they would call it as ‘same and opposite reaction’. This is typical sangh narrative. These double standards they follow in every news. ToI is just transparently biased newspaper.“