Second-seed Federer took 71 minutes to claim a 6-4, 6-3 victory over the Spaniard, who made errors and looked physically exhausted, reports Efe.

“It was a very difficult match for me,” Nadal said afterwards.

“He played very fast and he played well. I don’t know how many unforced errors he made,” the Spanish star added of the Swiss winner.

“He just played too good. That’s my point of view. So congrats to him,” Nadal added.

Sunday’s victory meant that Federer has now won his 15th match out of 38 clashes against Nadal.

Federer, who has now won the 94th title of his career and his sixth this year, claimed the Shanghai title for a second time after winning in 2014.

Nadal has played in the final of the tournament twice. 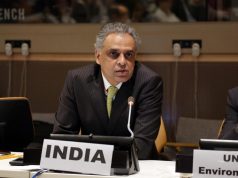