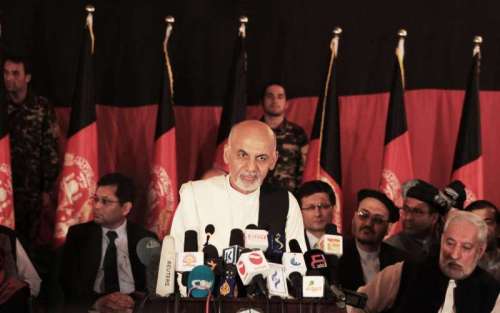 “Since we Afghans do not have computerised ID card, we do not have the statistics of eligible voters. We still have security problems, therefore it is difficult to have a fair election,” Xinhua quoted IEC chief Ahmad Yousuf Nuristani as telling reporters.

Following the audit conducted by the IEC and supervised by the UN, “the IEC announced that 11,945 polling stations’ results were declared valid, 1,260 polling stations were invalidated and 9,677 boxes recounted.

“And afterward, after reaching deal between the two candidates, the IEC announces Ashraf Ghani Ahmadzai as new president of Afghanistan,” he said.

“Therefore, the election process comes to an end,” Nuristani said.

Nuristani also congratulated Ghani Ahmadzai as Afghanistan’s new president and Abdullah Abdullah as chief executive, a post that equals that of prime minister.

The announcement came hours after Ghani and his rival Abdullah Abdullah signed an agreement on the structure of the national unity government, ending the months-long election deadlock.

Afghanistan’s third presidential election since the fall of Taliban regime was held April 5 but since none of the eight candidates secured more than 50 percent of the votes, a runoff was conducted between front-runners Abdullah and Ashraf Ghani June 14.

Earlier in the day, the spokespersons for Ghani and Abudullah announced that the inauguration of the new government will take place by the end of month, possibly Sep 29.