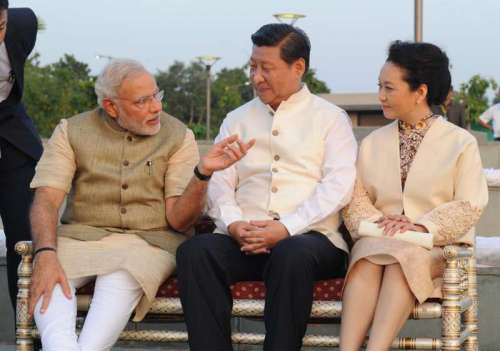 India and China have reiterated their commitment to an early settlement of the boundary question and to pursue this as a strategic objective, a joint statement by both sides on Chinese President Xi Jinping’s visit said here Friday.

During Xi’s official, three-day visit, “the two sides exchanged views on the India-China boundary question and reiterated their commitment to seek a fair, reasonable and mutually acceptable solution, proceeding from the overall interests of bilateral relations”, the statement said.

“Recalling the Agreement on the Political Parameters and Guiding Principles for the Settlement of the Boundary Question signed in April 2005, both sides reiterated their commitment to an early settlement of the boundary question and expressed their conviction that this will advance basic interests of the two countries and shall, therefore, be pursued as a strategic objective,” the joint statement on ‘Building a Closer Developmental Partnership’ said.

They reaffirmed the utility and significance of the mechanism of Special Representatives for seeking a political settlement of the boundary question and for handling border related matters.

Noting that improved bilateral military ties are conducive to building mutual trust and confidence, the two sides agreed to a regular exchange of visits between the defence ministries and military leaders “so as to expand pragmatic cooperation in the relevant fields”.

India expressed appreciation to China for providing flood-season hydrological data and the assistance in emergency management.

The two sides will further strengthen cooperation through the Expert-Level Mechanism on the provision of flood-season hydrological data and emergency management, and exchange views on other issues of mutual interest, the statement said.

“Both sides reiterated their willingness to proactively resolve all outstanding differences based on the Five Principles of Peaceful Coexistence through friendly negotiation without letting them affect the overall development of bilateral relations.”

“The two sides reaffirmed their commitment to consolidate the Strategic and Cooperative Partnership for Peace and Prosperity on the basis of the principle of mutual and equal security and mutual sensitivity for each other’s concerns and aspirations.”

Both sides also decided to strengthen political communication, deepen strategic trust as well as intensify political dialogue and consultations at all levels.

With this objective, they also agreed upon regular visits at the level of heads of state/government. The leaders of the two countries will continue to meet on the sidelines of multilateral fora as frequently as possible.

Xi said he would welcome Modi’s early visit to China. Modi thanked Xi for that, and said he accepted the invitation from the Chinese side with pleasure and looked forward to visiting China at an early date.

The two also recognised that their respective growth processes are mutually reinforcing, and agreed to leverage mutual complementarities and build a closer developmental partnership.

The leaders agreed to make this developmental partnership a core component of the Strategic and Cooperative Partnership for Peace and Prosperity.

This developmental partnership is conducive not only to the common interests of both sides, but also to stability and prosperity of the region and the world, the statement said.

The statement also noted all the economic agreements signed by both, including in railways, and the agreement to forge closer ties in the cultural and people-to-people area.

Xi was here on a three-day state visit and left for Beijing Friday afternoon.