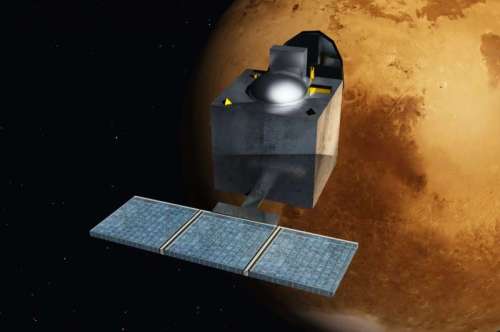 An Indian spacecraft will enter Mars Sep 24 for scientific exploration of the red planet after a 300-day voyage through inter-planetary space, a space agency official said Monday.

“After cruising through 666-million km across the solar orbit, for over nine months, our spacecraft will be inserted into the Martian orbit Sep 24 at 7.30 a.m., Indian Space Research Organisation (ISRO) scientific secretary V. Koteswara Rao said here at a preview of the mission’s tryst with the celestial object.

The orbit insertion will take place when the spacecraft will be 423 km from the Martian surface and 215 million km away (radio distance) from the earth.

The ambitious Rs.450-crore ($70 million) Mars Orbiter Mission (MOM) was launched Nov 5, 2013 on board a polar rocket from the spaceport Sriharikota off the Bay of Bengal, about 80 km north-east of Chennai.

“India will be the first country in the world to insert a spacecraft into the Martian orbit in its maiden attempt if the operation succeeds and also the first Asian country to reach the red planet’s sphere,” Rao said.

The state-run ISRO will be the fourth space agency after National Aeronautics and Space Administration (NASA) of the US, Russian Federal Space Agency (RFSA) and European Space Agency (ESA) to have undertaken a mission to Mars.

In the run-up to the D-day, the mission scientists will do course (trajectory) correction Sep 22.

“The course correction has been postponed to Sep 22 from Sunday (Sep 14) to conserve the precious liquid fuel weighing (852 kg) and ensure the orbital insertion takes place when the spacecraft is closer to Mars for smooth transition from the sun’s orbit,” Rao said.

Scientists at the spacecraft’s control centre have started uploading commands since Sunday and will verify them late Monday.

During the Orbiter’s long journey, mid-course correction was carried twice – Dec 11 and June 11 – but skipped in April and August as it was cruising in the solar orbit as intended.

“The liquid apogee motor (LAM) or fuel engine at the bottom of the spacecraft will be fired Sep 22 for four seconds to enter the Martian sphere of influence and the course correction will consume about 500gm of fuel,” Rao said.

The speed of the spacecraft will also be reduced to 2.14 metre per second from 22.2 km per second for enabling smooth transition into the Martian orbit from the sun’s orbit Sep 24.

The insertion operation will begin at 4.17 a.m. by first activating the spacecraft’s three antennas for receiving and transmitting signals between earth and Mars.

At 6.56 a.m., the spacecraft will be rotated towards Mars and five minutes later when sunlight is not falling on the Martian surface causing eclipse, the thrusters beneath the engine will give the Orbiter altitude control.

“Telemetry signals resume and Doppler measurements will provide first signals about the successful insertion of the spacecraft into the Martian orbit,” Rao added.

The spacecraft, with five scientific instruments, will be placed in an elliptical orbit, with the nearest distance from the Martian surface being 423 km and the furthest 80,000 km, to rotate around it in a duration equivalent to 3.2 earth days.