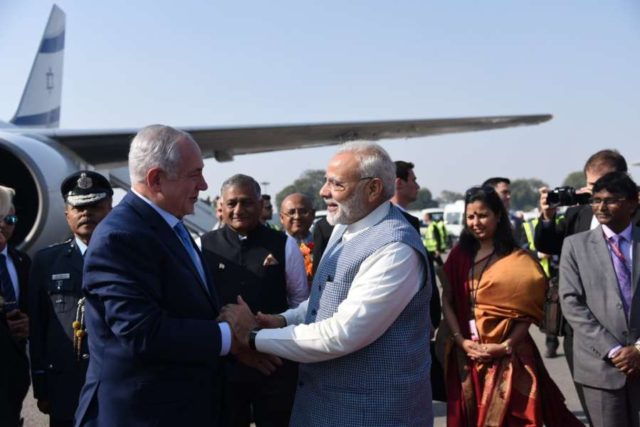 India and Israel: Personal chemistry shores up strategic ties. While the bilateral with Israel has been described as a “strategic partnership”, India’s relations with Israel cannot be divorced from the larger West Asian geopolitical canvas where Palestine is a major factor…..writes C. Uday Bhaskar,  Director, Society for Policy Studies, New Delhi

The visit of Israeli Prime Minister Benjamin Netanyahu to India (January 14-19) commemorates the 25th anniversary of the opening of an Indian embassy in Tel Aviv in 1992 and will further consolidate an important and strategically distinctive bilateral relationship for both nations. It has had a chequered past since the post-World War II birth of both countries but is poised for a pragmatic future trajectory based on shared interests.

With a population below nine million and a GDP of $350 billion, Israel is relatively small compared to the Indian behemoth with a population of 1.25 billion and a GDP of $2.5 trillion. Yet Israel occupies a very special niche in India’s security framework and has been a supplier of critical military technology. This was illustrated during the 1999 Kargil War, when precision-guided ordnance was obtained from Tel Aviv.

That India is among the world’s largest importers of military inventory and that Israel is a major arms exporter also provides a natural complementarity to the bilateral relationship. Over the last two decades, the quantum of military-related imports from Israel has steadily increased. It is estimated that India, which buys almost $1 billion worth annually, accounts for over 40 percent of Israeli defence exports.

The Netanyahu visit reciprocates that of Prime Minister Narendra Modi in July 2017, the first by an Indian Prime Minister to Israel. The Modi-Netanyahu personal chemistry was on display during that visit which was reciprocated as Modi personally received the Israeli leader at the airport when he arrived Sunday afternoon. The two leaders share many characteristics, including a visible political resolve in relation to Islamic radicalism and terrorism. Netanyahu will also get the Gujarat-special status, a detour to Ahmedabad, which Modi accords to certain leaders.

During the July visit, Modi said, “Israel and India live in complex geographies. We are aware of strategic threats to regional peace and stability. Prime Minister Netanyahu and I agreed to do much more together to protect our strategic interests.” The joint statement also added: “There can be no justification of acts of terror on any grounds whatsoever.”

While the bilateral with Israel has been described as a “strategic partnership”, India’s relations with Israel cannot be divorced from the larger West Asian geopolitical canvas where Palestine is a major factor.

The Jewish quest for a permanent homeland goes back a long way. Mahatma Gandhi had opined in 1931: “I can understand the longing of a Jew to return to Palestine, and he can do so if he can without the help of bayonets, whether his own or those of Britain… in perfect friendliness with the Arabs.” This sentiment shapes the Indian approach to the complex and tangled Palestine issue.

India has traditionally supported the Palestine cause on the international stage and has sought to maintain a fine balance regarding its bilateral with Israel in the competing regional politics of West Asia. It appeared that the Modi dispensation government had taken a bold decision to remove the hyphenation between Israel and Palestine, but it would be misleading to infer that the government has uncritically cast its weight totally with Israel and the US.

The recent vote at the UN over the Trump declaration about Jerusalem saw Delhi voting with the larger global consensus that censured the US over its announcement. Netanyahu, on the eve of his India visit, said this vote would not materially affect the bilateral. India and Israel are keen to expand the current bandwidth of the trade and economic relations to move beyond military sales and include energy, cyber security and innovation in desert/arid land agriculture, among other sectors.

The last leg of the Netanyahu visit will take him to Mumbai. The enormity of the November 2008 terror attack that targeted Chabad House will be recalled, though justice for the innocent victims — Indian, Israeli and other nationalities, remains elusive.