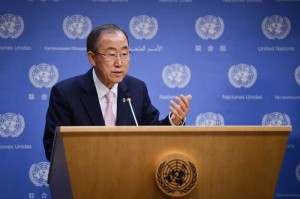 Ban said in a speech in Seoul that North Korea “suddenly” notified him of the cancellation through diplomatic channels earlier in the morning, adding that it was very regrettable.

The UN chief arrived in South Korea on Monday to attend the World Education Forum (WEF) that kicked off on Tuesday in the western port city of Incheon.

Ban told a press conference in Incheon on Tuesday that he would visit the inter-Korean industrial zone in Kaesong after consulting with both South and North Korea.

Ban was scheduled on Thursday to meet with South Korean businesses and North Korean workers inside the factory park.

“They are reversing the decision for me to visit the Kaesong Industrial Complex. No explanation was given for this last-minute change,” Yonhap quoted Ban as saying during a speech at the Seoul Digital Forum. “This decision by Pyongyang is deeply regrettable.”

It is not the first time that Pyongyang made a last-minute cancellation of trips by high-profile figures to the North, including a 2014 scuttled visit by Robert King, US special envoy for North Korean human rights.