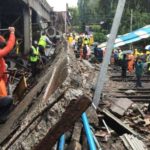 Heavy overnight rains and waterlogging in many areas is suspected to be the cause of the crash of the structure, known as the Gokhale Bridge, on S.V. Road.

There were no immediate reports of any casualties as search operations were launched by the Fire Brigade and other rescue agencies.

Work was on to remove the debris from the WR tracks which blocked services in both directions, hitting hard the Mumbai commuters bound for their offices.

Mumbai’s Dabbawalas have suspended all their tiffin box deliveries on Tuesday on the WR routes, but would continue on other routes.