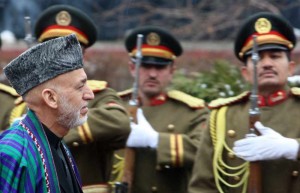 The Pakistan Foreign Office has declined to react to allegations levelled by the outgoing Afghanistan President Hamid Karzai over a peace settlement with the Taliban, media reported Friday.

“There will be a new government in Afghanistan shortly and we look forward to working with them closely,” spokesperson Tasnim Aslam said at weekly Foreign Office news briefing.

In his farewell speech, Karzai said he visited Pakistan 20 times in an attempt to reach a negotiated settlement with Taliban, but his efforts were thwarted, Dawn online reported.

He accused Pakistan of trying to control Afghanistan’s foreign policy.

However, with new government taking office Monday, Pakistan said it intends to use the opportunity to turn the page in ties.

“Pakistan and Afghanistan are neighbours. We face common challenges and we have to confront them and find solutions for them jointly through collaboration,” the spokesperson said.

The spokesperson said there was no planned meeting between Prime Minister Nawaz Sharif and his Indian counterpart Narendra Modi on the sidelines of the UN General Assembly session in New York.

“We have not sought a meeting and we have not received any request,” she added.