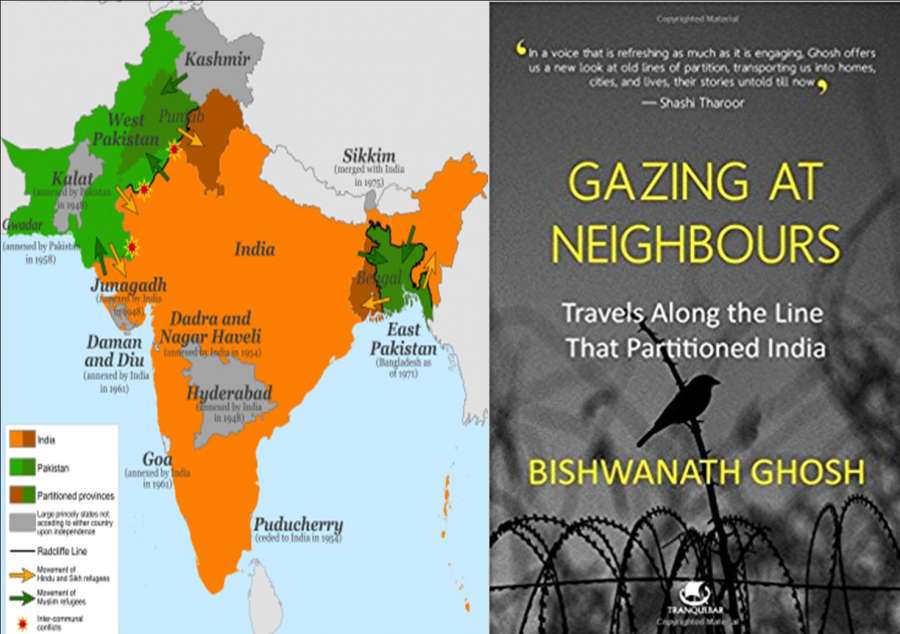 A writer travelled along the Radcliffe Line — through the vibrant greenery of Punjab as well as the more melancholic landscape of the states surrounding Bangladesh — to examine life on the border. But contrary to the general perception, he found the regions along the Line among the “most peaceful and boring places on earth” with nothing but a string of villages on either side.

Titled “Gazing at Neighbours: Travels Along the Line That Partitioned India” (Tranquebar/Rs 399/347 pages), this non-fiction travel book is authored by senior journalist Bishwanath Ghosh. Launched recently at INTACH here in the capital, the book is a narrative of historical stock-taking as much as of travel.

What was the reason behind his curiosity about the Radcliffe Line that led him to travel extensively along it?

“For the simple reason that I had no idea whatsoever how the Radcliffe Line — and the places sitting on it — looked like, even though the creation of that saw over one million people being butchered and another 15 million uprooted from their homes. Was the line inhabited? If yes, who lived there? What kind of life did they lead,” Ghosh asked during an interview.

He said that his travels “lifted the curtain over my ignorance” and that the Radcliffe Line turned out to be very different from what people think of it.

“The Radcliffe Line, in spite of all the bloodshed it caused 70 years ago, turned out to be one of the most peaceful and boring places on earth. It is nothing but a string of villages, with farmers bent over their crops on either side of the line. It is life as usual for these farmers: The border is a mere technicality for them.

“They bear no animosity whatsoever towards Pakistan or Bangladesh – – and why should they? A farmer is a farmer first, no matter on which side of the Radcliffe Line he lives. Which is why you hear the shrillest anti-Pakistan cries not on the Radcliffe Line but in faraway Mumbai or in the insulated, air-conditioned TV studios of New Delhi. If only people travelled, India would be more peaceful and less noisy,” added Ghosh, an associate editor with The Hindu newspaper in Chennai.

He also found that the border in Punjab is completely fenced — though that does not prevent smuggling of narcotics — and that there is no movement of people across the Line other than at the Wagah checkpost. But on the Bangladesh side, Ghosh said, the Radcliffe Line often runs through villages and hamlets and homes, so people easily move across.

“I myself stepped across the border — into Bangladesh — numerous times,” he recalled.

Several books have been written on the Radcliffe Line in the past. Ghosh’s work stands out primarily for its ability to match historical facets with minute detailing of his travel experiences. Thus the book reads as a credible account on these lines as well as a fascinating travelogue.

Ghosh said that his objective was simple. “To grab the reader gently by the arm and take them with me to the lands through which the Radcliffe Line runs while telling them the story of Partition in the simplest manner possible. This has been my approach for all my books.

The 47-year-old author has previously published the popular “Chai, Chai: Travels in Places Where You Stop but Never Get Off”, “Tamarind City: Where Modern India Began”, and “Longing, Belonging: An Outsider at Home in Calcutta”.