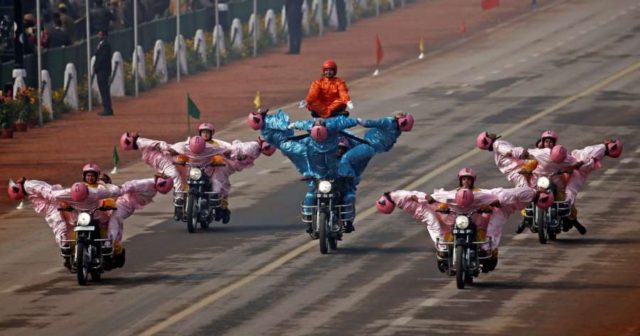 It was for the first time that 10 guests of honour — from all 10 Asean countries — were invited for the annual official celebrations, signifying India’s growing strategic interests in its eastern neighbourhood that surrounds the maritime underbelly of Asia – the Indo-Pacific….reports Asian Lite News

India on Friday celebrated its 69th Republic Day with 10 leaders of Asean countries taking a close look at the country’s military might and cultural diversity and getting a peep into achievements at the annual grand parade.

It was for the first time that 10 guests of honour — from all 10 Asean countries — were invited for the annual official celebrations, signifying India’s growing strategic interests in its eastern neighbourhood that surrounds the maritime underbelly of Asia – the Indo-Pacific.

Despite a thick fog blanketing the city, hundreds turned up on both sides of Rajpath in the heart of Delhi to watch a grand march past that wound its way over eight kilometres from Raisina Hill, with the imposing Rashtrapati Bhavan in the backdrop, to the 17th century Red Fort.

The day began with President Ram Nath Kovind unfurling the Indian flag at the Rashtrapati Bhavan and Prime Minister Narendra Modi paying tributes to the fallen soldiers at the Amar Jawan Jyoti near India Gate.

Sporting a multi-coloured turban, Modi personally invited the 10 Asean guests to the stage where a Who’s Who of the government, including Kovind and Defence Minister Nirmala Sitharaman, were also seated.

President Kovind, the commander-in-chief of the armed forces, took his first Republic Day salute as the parade was led by Army personnel carrying the Asean flag and flags of all 10 Asean nations.

It was followed by military and paramilitary contingents, including mounted troops from the 61st Cavalry and mechanised columns. Martial music filled the air as soldiers drawn from some of the finest military units marched with clockwork precision.

It was a first all-women contingent — led by Sub Inspector Stanzin Noryang, an officer from Jammu and Kashmir’s Ladakh region — from any force to perform biking stunts at the annual event.

Making its debut on the occasion was the country’s first indigenously-built Weapon System Integrated helicopter Rudra, designed and developed by the Hindustan Aeronautics Ltd (HAL).

The 90-minute ceremonial parade ended with a spectacular fly past by the Air Force despite foggy conditions. Light combat aircraft Tejas, Jaguars and MiG-29 manoeuvred in various formations over the Rajpath skies.

The Sukhoi-30 MKI aircraft split upwards, making a ‘Trishul’ in the sky, and another fighter plane performed ‘vertical charlie’ manoeuvre over the saluting dais, leaving the spectators in awe.

Fifteen of the 18 children who won the National Bravery Award also participated in the parade. Two girls and a boy were given the award posthumously.

Amid fears of possible terror attacks, a tight security blanket was thrown around the national capital including the venue. Nearly 60,000 police and paramilitary personnel were deployed across Delhi.

Maharashtra won the award for best state tableau at this year’s Republic Day Parade while the Punjab Regiment of the Indian Army bagged the award for the best marching contingent among the three services and ITBP among the paramilitary and auxiliary forces.

The awards were given away by Defence Minister Nirmala Sitharaman at a function on Sunday.

The second award among tableaux from states and union territories went to Assam, which depicted traditional masks and ‘sastras’.

From flaunting tricolour clothes to flags adorning the vehicles, the people of Delhi sported patriotism with the colours of the national flag everywhere.

With #Republicday2018 as one of the trending hashtags on Twitter, Facebook and Instagram, youngsters took to the social networking sites to give vent to their patriotic fervour.

From putting tricolour frames on profile pictures to uploading selfies wearing the colours of saffron, white and green, they expressed their love for the country.

The Retreat ceremony at Attari-Wagah and Hussainiwala on the India-Pakistan border in recent days has seen a unique pledge being taken by thousands of visitors who flock to watch the high-voltage event.

The unique thing about this pledge is that thousands of people from various states are taking it at the same time, standing right in front of the border guards and people of neighbouring Pakistan.

“Resolving to make India free of the factors which are becoming stumbling blocks in its progress, people from across the country took the ‘Sankalp Se Sidhi’ New India Pledge,” Field Publicity Officer Rajesh Bali told media.

The 25-minute spectacle at the Attari-Wagah border attracts thousands of people every evening as the flags of India and Pakistan are lowered and border gates are closed for the night.

The ceremony, along the Radcliffe Line international border between India and Pakistan, gets your adrenalin and heart pumping faster as border guards, BSF of India and Pakistan Rangers from the neighbouring country, go through their disciplined paces.

The Indian side at Attari has a new stadium-like visitors’ gallery that can accommodate up to 15,000 people. The gallery is always jampacked.

The visitors’ gallery goes up to a height of 25 metres (equivalent to a seven-storey building).

Before the ceremony begins, women and children can be seen dancing their hearts out to some foot-tapping Bollywood songs of the patriotic genre.