An Indian perspective on China. Author Pradip Baijal looking at the issue from the field upwards into all aspects of this very complex journey, and explaining the Indian standpoint in “Containing the China Onslaught… reports Asian Lite News 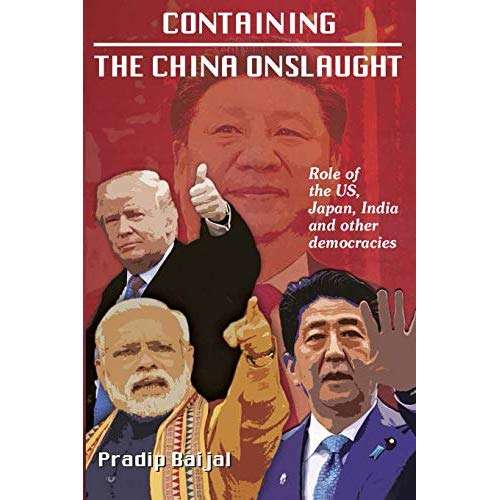 A fascinating book on India-China growth parameters, different from contemporary writings by American and Chinese economist/political scientists/diplomats has appeared recently from an unlikely author, Pradip Baijal, a bureaucrat reformer, looking at the issue from the field upwards into all aspects of this very complex journey, and explaining the Indian standpoint in “Containing the China Onslaught”, published by Quadrant and printed by Thomson Press.

The book has many surprises, the elegant and expressive hard cover, its content and quality of paper, ex-Foreign Secretary Shyam Saran’s review on back cover, “We finally have a well-researched and an eminently readable book on China, offering a much-needed Indian perspective on that country… It plots the incredible trajectory of China’s growth over the last four decades and offers uncommon sights into the key drivers underlying it, encompassing political, economic and geopolitical factors. The author’s critique on India’s lost opportunities will stimulate a welcome debate and that is a compelling reason to read the book”.

Economist Nag’s review is almost a warning too, “Any non-fiction book is written with certain audience in mind. Author of a well-researched book is looking for approbation from thought leaders, intellectuals and academics. But when Stephen Hawking wrote his best seller A Brief History of Time, he wanted to reach out to non-academics and lay public. That is why his publisher had warned him that each equation in his book would cost him at least a few thousand readers. There are also books which are written to argue in favour of a particular ideology or a particular world view or a particular policy framework. There are also books which are written only the author thinks he has to say something of importance to the entire world. This later genre of books may turn out to be a great book or a babble of thoughts — a kind of stream of consciousness. I find this book has elements of all the above characteristics.”

The book has been written with authentic (World Bank etc.) data of the last two centuries for all major countries in a seamless flow, using charts and graphs, making it easy to understand, and very valuable for institutions, colleges, researchers, Indian and international bodies. The author has kept the book very short (150 pages — rest are notes on references, annexures etc.). It reminds me of Kishore Mahbubani’s 91-pager Has the West Lost it, confirming the old dictum — only the authors read long books. But for the researcher, the book is armed with long notes on references.

The book traces the 1830-1970 journeys of both countries when they reduced from half of world’s GDP to 5 per cent, through colonial loot, the first and second industrial revolution and mismanagement of economies and famines, often induced. The book then describes the efforts of both countries during 1970-2015 through increased liberalization/capitalism and American guidance, to climb back from 5 per cent to 25 per cent of the world’s GDP. The book describes the miraculous growth of China during this period when after stuttering along with India for long periods up to 1990, China shot up to five times of India’s GDP and equal to American GDP in 2015. The author has narrated through anecdotal evidence how China, and Mao/Deng in particular, made a fool of seven American presidents starting with Nixon, abetting this impossible growth, and how.

According to the author, countries normally fight wars before allowing another power to take over. The author ascribes all this to the great Confucian deception (elaborated in 36 stratagems), practiced by Deng. He has also described the greatest growth in China during 2005-2015, just ten years, and how China kept it all under wraps till 2005, evidenced by the greatest banker Goldmann Sachs also being deceived stating that China’s was just another normal growth process. (BRICS reports of 2001 and 2005 described the growth process in all BRICS countries similar). The author also wonders how the greatest growth ever of 2005 to 2015 was achieved after Deng was long dead and gone — perhaps owing to the enormous training he gave to his party and government leaders, and meritocracy, he introduced.

The book also examines the role of Tiananmen massacre and India’s handling of Kashmir’s Hindu exodus during the same period. The book has also described the China of today, its weaknesses, and interestingly the outline of a process that will help India catch up, and perhaps overshadow China. But the best is hinted in Ashok Soota’s (of Wipro, Mindtree and Happiestmind) foreword, that the author is writing a sequel to the book describing Trump’s policies which have put brakes on China, and how IR 4.0/AI and 5G have the capacity to change this story.