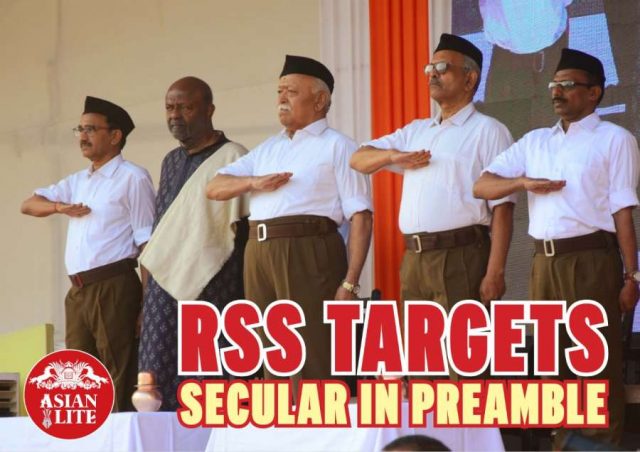 “Sovereign, socialist, secular, democratic republic” is how India is referred to in the preamble of the Constitution. However, J. Nandakumar, a key RSS leader and All India Convenor Prajna Pravah, a Sangh offshoot, wants India to reconsider the inclusion of the word “secular”, claiming secularism is a “western, Semitic concept”.

In an exclusive interview to IANS, Nandakumar said: “Secularism is a western, Semitic concept. It came into existence in the West. It was actually against Papal dominance.”

He argued that India does not need a secular ethos as the nation has moved “way beyond secularism” since it believes in universal acceptance as against the western concept of tolerance.

Nandakumar, who has attacked the Mamata Banerjee government in his book for alleged “Islamisation of West Bengal”, told IANS: “We have to see whether we need to put up a board of being secular, or that whether we should prove this through our behavior, actions and roles.”

It is for society to take a call on this, rather than by any political class, on whether the preamble to the Indian Constitution should continue to have the word “secular” in it or not, he added.

In between signing his books and obliging wannabe Hindutva cadres with selfies, Nandakumar said that the very existence of the word “secular” in the preamble was not necessary and how the constitution founders too were against it.

“Baba saheb Ambedkar, Ladi Krishna Swamy Aiyaar — all debated against it and said it (secular) wasn’t necessary to be included in the preamble. That time it was demanded, discussed and decided not to include it,” he said.

Ambedkar’s opinion was, however, disregarded when Indira Gandhi “bulldozed” the word “secular”, in 1976, said the head of the Prajna Pravah, an umbrella body of several right wing think-tanks

As Nandakumar prepared to return to his base in Kerala, where, he emphasises, the RSS has its work cut out in the “fight against the Kunnor model”, he said that the inclusion of “secular” was done with the intent to damage the concept of Hindutva.

“It was to demolish, destroy the overarching principle of Hindutva that binds us together”, he said.

Asked whether the Sangh would try to prevail on the BJP, which has 303 seats in the Lok Sabha, to omit “secular” from the Constitution preamble, a smiling Nandakumar declined to reply.