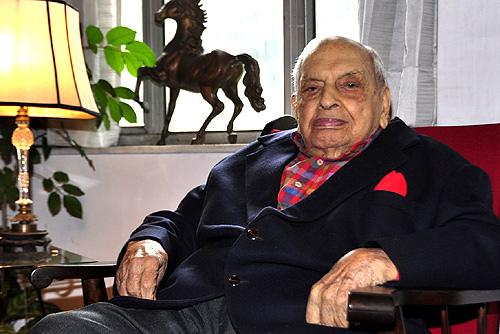 Russi Modi was a flamboyant, visionary corporate leader who laid the foundation for the growth of one of India’s pioneering private sector company into a global steel behemoth by combining excellence in business with an enduring commitment to society.

Having steered the erstwhile TISCO – now Tata Steel – in various capacities for over half a century, he earned the sobriquet of India’s “man of steel” – reflecting both his contribution to the key manufacturing sector as also a iron resolve in achieving goals.

Modi, 95, breathed his last at a private nursing home near his south Kolkata residence Friday night.

Born in Mumbai Jan 17, 1918, to an affluent Parsi couple, Sir Homy Modi and Lady Jerby, Rustomji Hormusji Modi – adoringly called Russi by his parents – was educated at Harrow and Christ Church College, Oxford and joined as an office assistant at TISCO upon his return to India.

He played a key role in undertaking and completing a major modernisation programme, and became something of an institution in the company.

A senior official who worked with him for two decades since 1972, saluted his leadership quality.

“He was humane, he could keep the workers happy. He created a great work culture. There were never any strikes in TISCO.

“The economy had not been opened up till then. So he never had to do anything in terms of business strategy like buying new plants. But he excelled in what he had to do – the operations management,” said P Roy, director general, the Bengal Chamber.

A man with a zest for life, Mody would play bridge with the juniormost of staff at his residence, where young trainees were also invited.

He loved saying “What is man management? That one must behave naturally with any human being.”

But the softer side never eclipsed his steely side.

“He was a hard taskmaster. There were even instances where he played bridge with a company official till 4 a.m., only to hand him a sack order at 9 a.m. for inefficiency,” said a official who worked with him.

While keeping focus on he company’s business growth, Mody widened its development initiatives for local communities and to address larger national needs. Entities like the Tata Steel Rural Development Society came up in 1979 and the Tata Football Academy in 1987 – the company’s ad jingle “We also make steel” brought out this philosophy.

Mody, however, fell out the company on his retirement, which he thought was forced on him in 1993.

He started speaking against the group, particularly its then chairman Ratan Tata repeatedly, before the two made peace in later years.

“It could have been handled more gracefully on both the sides,” Mody told his biographer about his tussle with Ratan Tata that ended with his severing of ties with the company after running its steel business from Jamshedpur for 53 years.

“There was a time when I did and said things that had hurt Ratan Tata and Ratan had said and done things that hurt me. However, after many years of chilly relationship, I have become friends with Ratan again,” he said.

However, months after his retirement, then prime minister P.V. Narsimha Rao assigned a new role for Mody by appointing him joint chairman of Air India and the then Indian Airlines. However, he resigned after some time, frustrated over some vested interests scuttling his moves to resurrect the airlines.

In 1989, he was awarded the nation’s third highest civilian award Padma Bhushan in 1989 for his exemplary contribution to the Indian industry.

He also tried his hand in politics, but without much success. In 1998, Mody contested the Lok Sabha election from Jamshedpur constituency as an independent, but lost to a BJP rival. However, he did get about two lakh votes.

Fond of good food, and an able pianist, Mody maintained a lavish lifestyle in Kolkata after his retirement. But as years rolled by, he became lonely, lost his memory and power of speech, all banes of advancing age.