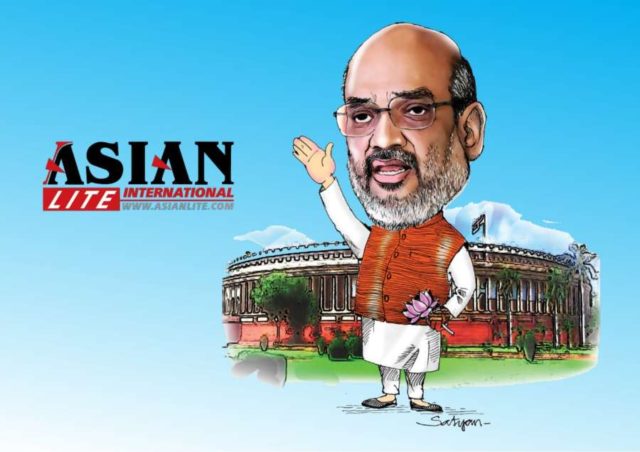 HOME MINISTER AMIT SHAH: Modiji wants to make India a $5-trillion economy, and put it among the world’s top three. But economic progress is not possible without securing the country. There is need to maintain external security and law and order in the states …. A special report by Asian Lite

“Modiji wants to make India a $5-trillion economy, and put it among the world’s top three. But economic progress is not possible without securing the country. There is need to maintain external security and law and order in the states,” Shah said during the 49th Foundation Day celebrations of the Bureau of Police Research and Development (BPR&D).

He said over 34,000 personnel had sacrificed their lives to maintain law and order within the country lending credibility to the Police Force, and urged policemen to carry forward the good work done by their colleagues.

Home Minister Mr Shah termed Maoism as a major internal security challenge and asked the authorities to maintain synergy between the states and Centre, while building local forces to neutralize organisations run by insurgent groups.

After abrogation of Article 370 of the Constitution from Jammu and Kashmir, which gave special status to the erstwhile state, the Centre’s focus is to eliminate Maoism completely.

He urged the states to adopt a focused, time-bound approach to completely eliminate the left-wing extremism (LWE) to ensure all-round development of the affected regions.

“Though incidents of LWE violence have come down, focus needs to be kept to eliminate it completely and all efforts need to be maintained by the Centre and states. There is need for capacity building of local forces to effectively neutralize Maoist organizations from their areas,” Shah said.

He stressed the need for vigilance and efficiency of the local police in the militancy-affected states.

Shah asked the states to use Central schemes and their own budget for police modernisation.

He also focused on the need to check flow of funds to Maoist organisations.

The Home Minister called upon the states to rationalize their surrender policy to mainstream innocent individuals caught in the trap of Maoist violence and specifically talked about accelerating the pace of opening of schools under Eklavya model as well as ensuring the presence of banking facilities within 5 km to all citizens.

Assuring the state governments that the Centre would cooperate fully in eliminating Maoism, Shah said time has come for the security forces to formulate a proactive strategy to deal with the issue.

Talking about the national strategy to counter Maoism formed in 2015, Shah said that it was a multipronged approach consisting of security, development and ensuring participatory governance and rights for local tribals.

Under this strategy, he said, the protection of the rights of local citizens is the priority.

In a first of its kind initiative since assuming charge at the Home Ministry, Shah said Maoism has no place in Prime Minister Narendra Modi’s vision of ‘New India’.

Observing that Maoist organisations are against democratic institutions and that violence subverted the democratic process at the ground level, Shah said their strategy is to misguide people to keep them ignorant.

Referring to the success of security forces against Maoist violence, the Home Minister said the last few years have seen lesser number of districts being affected by LWE. From a high of 2,258 events of Maoist violence in 2009, Shah said, the events came down to 833 in 2018.

Directors General of paramilitary forces and senior officials of state governments were also present in the meeting.

A total of 1,400 Maoists were killed between 2009 and 2018. As many as 310 incidents of Maoist violence were reported in the first five months this year across the country in which 88 people were killed.

The Centre is implementing special assistance for most Maoist-affected districts with an annual outlay of Rs 1,000 crore to fill critical gaps in public infrastructure and services.