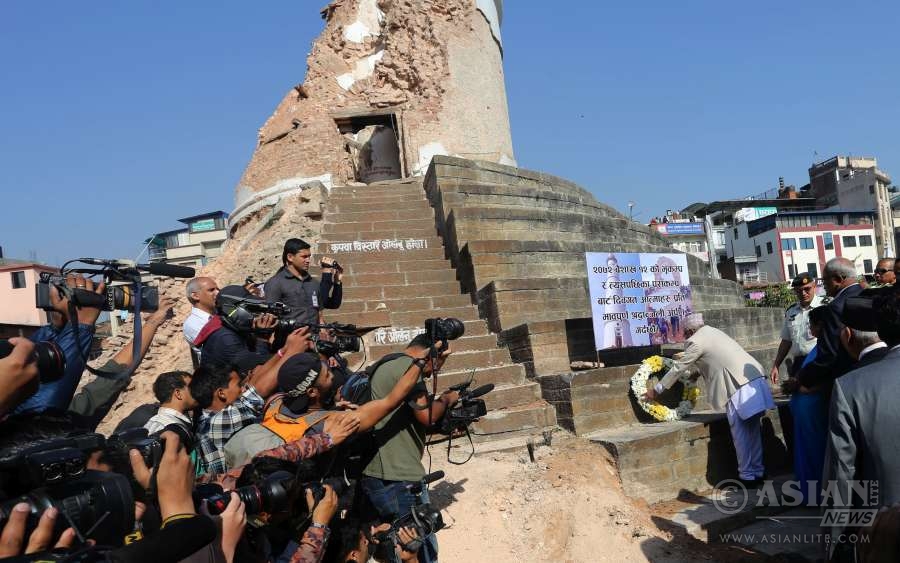 All is not well in Nepal a year after quake….writes Anil Giri 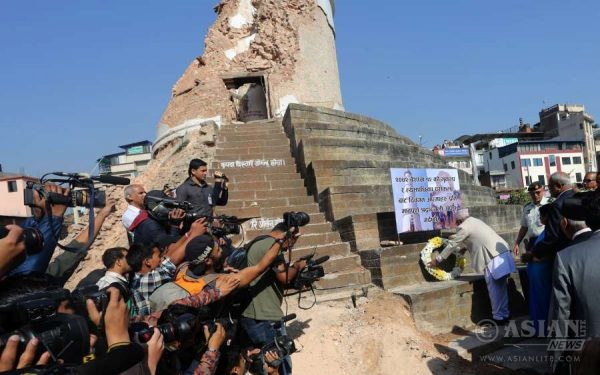 A year after the 7.9 magnitude Gorkha quake that claimed 9,000 lives and damaged billions of dollars-worth property, the Nepal government has done too little — and that too, too late — for the survivors and to rebuild the shattered infrastructure, shows official data.

Politicising the creation of the National Reconstruction Authority to rebuild the thousands of houses that were destroyed across many districts of the country, with entire villages flattened, especially those near the epicentre; delay over appointment of its CEO; finalising rules and regulations for the NRA and lack of government preparation towards addressing major natural calamities are some of the reasons to be blamed, say affected victims.

President Bidhya Devi Bhandari on Sunday arrived in Barpak, Gorkha, the epicentre of the April 25, 2015 earthquake, and inaugurated a park in memory of those who lost their lives in the disaster.

The over-politicisation of reconstruction process by political parties is the reason behind the delay in rebuilding the shattered infrastructure in the Himalayan nation, said former chief secretary Leelmani Poudyal, who played a key role in bringing out the reconstruction act.

It took nine months for the government to prepare the relevant law and appoint a CEO of the reconstruction authority.

“We will complete the reconstruction within five years that is mandated to us,” said NRA CEO Sushil Gyawali.

Over $4.5 billion was promised by the donor agencies during the donor conference in Kathmandu following the quake but the Nepal government has secured negotiations of barely $1 billion.

The newspapers in Kathmandu on Sunday were full of articles, supplements and pull-outs about the public agony, misery of quake, and stories of resilience of people whose hope had not yet faded.

‘Also of deferred hope’, ‘Of a never-ending wait’, ‘Of empty promise’, and ‘One made worse by the huge communication gap between the government, non-government sectors and the quake victims’, were major headlines.

Hardly three percent of the required budget for rebuilding the Himalayan nation was released or spent, an example of the hollow political commitment, a daily noted.

According to the statistics provided by the NRA, the key executing body, over one million houses were damaged or destroyed, but over 31,000 families were compelled to rebuild houses on their own after the government failed to deliver upon its promises.

Two tranches of Rs.10,000 and Rs.15,000 each have been belatedly handed over by the government and now the National Reconstruction Authority has begun signing loan agreements whereby each affected families will be given Rs.200,000 to rebuild their houses.

Megh Lal Ghale, a resident of Barpak, said he will no longer wait for the government’s support to rebuild his house. “No one is waiting any longer to receive the money from the government.”

NRA, the government agency that is tasked to complete the reconstruction process in five years, has published the list of 400 villages in Nepal that need subsidy for rebuilding various infrastructure.

The process of providing subsidy of Rs.200,000 began in Dolakha district where 400 families were handed over the money to rebuild their houses. But the victims said the amount was mere peanuts.

Out of 770,000 families rendered homeless, only 700 have received the first instalment of the Rs.200,000 cash grant for building houses.

This was revealed only a few weeks ago in an indication how sluggish the approach has been on the part of the reconstruction authority when it comes to reaching out to the needy, said Ghale.