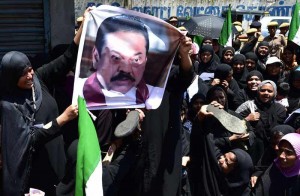 The violence, which began June 15 after a rally led by the Buddhist Bodhu Bala Sena (BBS), left at least four Muslims dead, 80 injured, and numerous homes and businesses destroyed in Aluthgama town and surrounding areas.

Senior government officials as well as President Mahinda Rajapaksa have denounced the violence and promised compensation to the victims.

But the government needs to seriously investigate who is responsible for the attacks on Muslim communities, Human Rights Watch said.

Police have detained at least 40 people.

“Sri Lankan authorities need to do more than arrest those carrying out the anti-Muslim violence. They need to investigate and identify any instigators,” said the US-based group.

“That means taking a hard look at the role and relationship between extremist Buddhist groups like the BBS and the Sri Lankan security forces.”

Buddhists and Muslims have previously had conflicts in Aluthgama, about 60 km south of Colombo.

The latest incident was sparked by a minor traffic incident June 14 between Muslim youths and the driver of a van carrying a Buddhist monk.

The BBS held a protest rally the next day purportedly to express concerns for the safety of Buddhists in the area.

At the rally, BBS leader Galagodaaththe Gnanasara Thera, gave a speech claiming that the majority Sinhalese population was in need of protection.

Soon after, mobs carrying poles and other weapons went on a rampage, attacking Muslims and Muslim homes and businesses in the town.

Even after the government ordered a curfew, Muslim homes and properties were targeted in nearby Beruwala, Welipenna and Dharga towns.

In addition to providing prompt relief for those who suffered harm in the attacks, the authorities should create a secure environment for members of all communities, Human Rikghts Watch said.