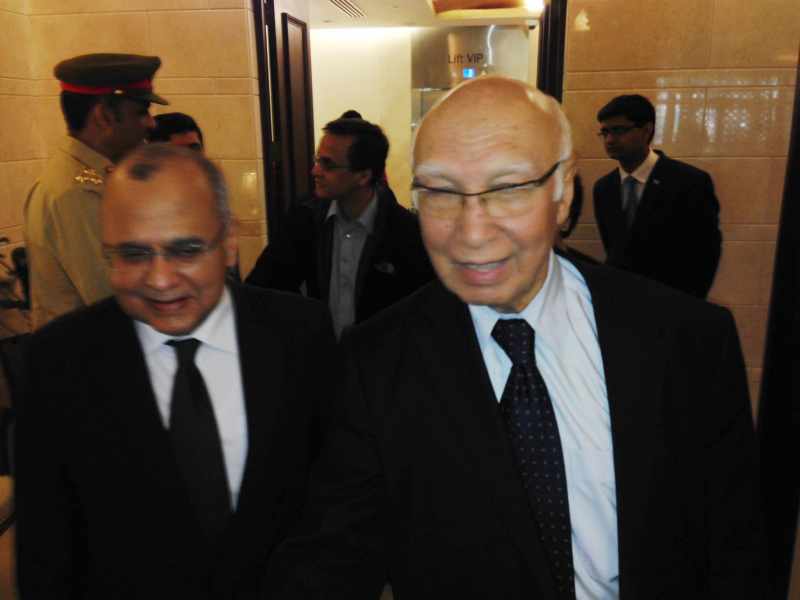 Pakistan’s stance on terrorists and their organisations hamper peace talks. There is no point in initiate talks with Pakistan when the Islamic republic letting terrorist forums and terror leaders like Hafeez Saeed to romp free ….writes Manzoor Ahmed, former diplomat and author 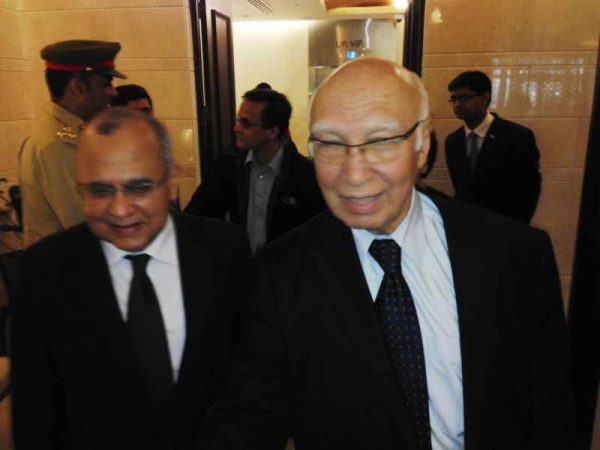 Prime Minister Nawaz Sharif’s venerable advisor on foreign affairs Sartaz Aziz never ceases to amaze by the eloquent manner in which he holds forth on manufactured truth and wild allegations. He now says India was holding back on the dialogue with Pak. He also knows the reason: Kashmir. He says because India was shy of talking about Kashmir, it was showing no interest in resuming the dialogue which, if he were to recall, was stalled by the Pathankot attack and other subsequent attacks, all carried out by his citizens, all of whom enjoy unbridled state patronage, the very  state he represents.

If Mr Aziz is serious about what he is talking about, that Pakistan is eagerly waiting to hear from India, then it would do immense good to his country as well as India, and the millions who live in the subcontinent, if he were to advise his government to take the initiative and lock up the jihadis who have been the bane of the people of both the countries.

It is not difficult to do so but it requires courage of conviction and integrity. On both the counts, Mr Aziz, Pakistan is found wanting. Otherwise, how can you justify the call for jihad against India being made openly in the streets of Pakistan. In the last week of June this year, for instance, LeT chief’s brother-in-law and second in command of the terrorist group, Abdur Rahman Makki, led a rally of terrorists and their sympathisers in Gujranwala, Punjab, openly admitting to the terrorist attack against Indian security forces in Pampore, Kashmir, on June 25. He called Pakistanis to join his terrorist group and wage a war against India.

If this is Mr Aziz’s message of peace and harmony to the people of India, then thank you, we can do without your blessings.

Mr Aziz knows very well that the jihadis have no place in a civilised world. The terrorist groups like LeT are not only a threat to India but equally a serious threat to Pakistan and its people. It is not difficult to see how. These terrorist groups have not only brought bad name to Pakistan and its people but also kept them in impoverished conditions. These are the groups which make Pakistan a failed or failing state. Mr Aziz is not unaware of these facts. And yet, he and his government cannot, or would not, take even a token action against terrorist groups targeting not only India but the people of subcontinent and beyond.

If there is any doubt in the minds of Pakistani leaders about the hand of LeT in the Pampore and other similar attacks in Kashmir in the recent times, it would require a serious intent and investigation to clear their minds. Since they are sceptical about Indian investigations, they have credible investigating agencies who could come to the same conclusions as the Indian security agencies have. The Pampore attack was the handiwork of LeT and Khalid Waleed, Hafiz Saeed’s son-in-law  masterminded the attack.

It has been known for some time that Hafiz Saeed, who has high political ambitions, is keen on passing on the mantle of being the terrorist head to his close family members, in this case his son-in-law Khalid Waleed and his son, Talha Saeed who has been leading prayers and other religious functions in the terrorist group’s headquarters in Lahore’s Chaubhurji, a vast, fortified complex with a mosque and other infrastructure, all of them geared to recruit, indoctrinate and train new recruits to terrorism. While Waleed has been quietly building his reputation among the recruits and the leadership of the terrorist group, the presence of the veteran operational commander Zaki-ur-Rahman forced him to play a low key role in the terrorist operations. Now with Zaki behind bars, and probably cut up with Saeed for ditching him (both had split in 2001 with Zaki accusing Saeed of usurping the jihad money for his personal use and for marrying a young widow of a terrorist killed in Kashmir), Waleed has come into his own. His focus is on reviving LeT’s activities in Kashmir and carrying out major attacks to ensure that peace never returns to Kashmir.

Talha Saeed , on the other hand, is being groomed to take on bigger responsibilities of running the vast jihadi empire which his father has built since the Afghan Jihad days, courtesy Pakistan Army and his Saudi patrons. Talha has been following up on the footsteps of his infamous father and all with the patronage of Pakistan Army.

These are all known facts and Mr Aziz and his patrons in the government would be even more knowledgeable about these developments. The terrorist group works in the ruling party’s backyard, that is Lahore. Incidentally, it also has considerable military presence with a  Corps HQ located in the vicinity. These are not matters of secrecy or Indian propaganda but an open book as far as the Pakistani leadership, including Aziz, is concerned.

The leadership is also equally aware that Indian concerns about these terrorist groups is genuine. After all terrorist attacks carried out by LeT operating from Lahore are happening at regular intervals.  So before Mr Aziz blames India for not taking the initiative to find peace in the region, he must look at his country’s refusal to act against terrorist groups like LeT. It is not business as usual, these days. Pakistan must show, and not say, that it is serious about mending its ties with India. India is serious and will go out of its way to find solutions to the problems which the people of both the countries face, like poverty, lack of connectivity, economic progress, food shortages and climate changes. The ball, Mr Aziz, is in your court.