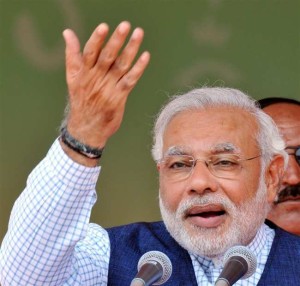 BJP leader Narendra Modi continues to attract huge bets and has emerged as the top contender for the next prime minister.

According to sources, an estimated betting worth over £120 million has taken place in Mumbai, New Delhi, Ahmedabad as well as in Pakistan and Dubai where the elections were keenly watched by expatriates.

Just two days before the results of the Lok Sabha elections are announced, the odds on Modi stand at just two paise, while Congress vice president Rahul Gandhi trails way behind at Rs.35 – a steep fall from the Rs.10 last week. Priyanka Vadra Gandhi, who campaigned for her mother Sonia Gandhi and brother Rahul Gandhi without contesting the polls, continues to be highly popular at Re.1 – far above her brother. Other likely contenders like Mayawati, Mulayam Singh Yadav and Mamata Banerjee have slid and command between Rs.45-Rs.55, while Aam Aadmi Party leader Arvind Kejriwal is a distant contender at Rs.60. The Bharatiya Janata Party-led National Democratic Alliance has also improved its tally on the number of seats it is expected to bag. For a tally of 220 seats, the figure quoted is 30 paise, for 230 seats it is 40 paise and for the magic figure – the simple majority of 272 – the rate is Re.1. Last week, the odds for the NDA getting around 230 seats were Re.1, an improvement as the election recorded unprecedented voter turnout of more than 66 percent. In contrast, the bookies anticipate that the Congress may be reduced to a double-digit presence in parliament, partly due to the anti-incumbency factor and largely owing to the aggressive campaign by Modi. However, the Left Front and other regional parties together may grab the rest of the seats, pointing to the resurgence of a strong Third Front and the possibility of new permutations and combinations. Among other highlights, the NDA is expected to perform exceedingly well in Uttar Pradesh, Rajasthan, Madhya Pradesh, Maharashtra and Gujarat. Simultaneously, other non-United Progressive Alliance parties would also enhance their performance based on regional sentiments and local preferences, overtaking the two main contenders and gaining importance during the process of government formation, bookies hope. However, betting is illegal in India and security agencies are closely monitoring the developments.