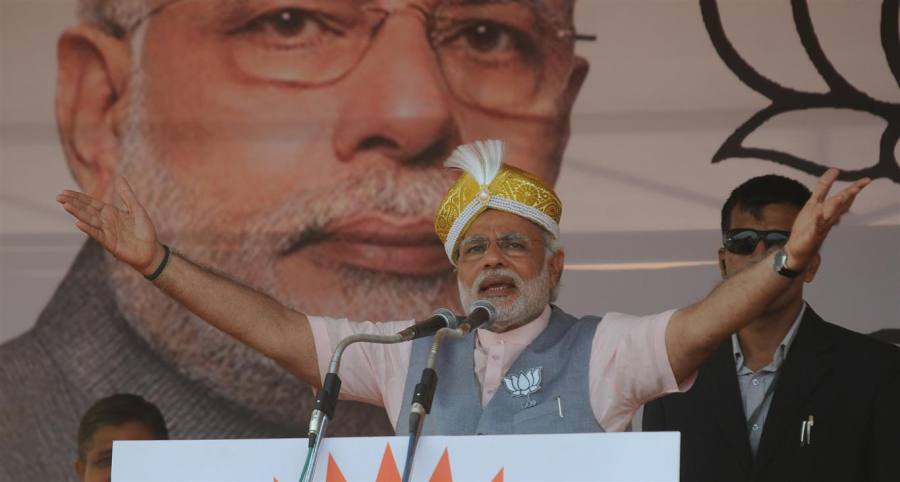 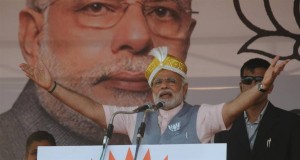 The BJP-led NDA coalition is poised to return to power by winning a majority in the Lok Sabha, ending a decade of Congress-led UPA rule, exit polls said Monday after the general election ended.Three exit polls projected the Bharatiya Janata Party-led National Democratic Alliance between 272 and 289 seats in the 545-member Lok Sabha where two members are nominated by the government.The India Today-CICERO exit poll and the ABP-Nielsen survey predicted 272 or more seats for the NDA, in which the BJP is the dominant partner. While the India Today-CICERO gave the Congress-led United Progressive Alliance (UPA) 115 seats and other parties 156, the ABP-Nielsen tally for the Congress grouping was 110.Projections by India TV-CVoter put the NDA on top with 289 seats and the UPA far behind with 101. Other groups were projected to get 148 seats and the Aam Aadmi Party (AAP) five seats nationally.Going by the projections, the Congress – India’s oldest political party – could end up with its lowest tally ever in the Lok Sabha, perhaps in just two figures.The BJP, led by its prime ministerial candidate Narendra Modi, said the exit polls were on expected lines. Its leaders insisted that the party was sure to get a comfortable majority in the Lok Sabha.“Wherever we went during campaigning, it was clear that people wanted a change (in government),” party leader Mukhtar Abbas Naqvi said. “They also wanted Modi to lead the country.”A dispirited Congress did not accept defeat, but a party leader, Rashid Alvi, said rising food prices certainly worked against the Congress all across the country.The exit polls gave the BJP and its allies far more seats than the Congress-led UPA in northern, western and central India. Only some parts of the country’s south held hope for the Congress.ABP News-Nielsen said the BJP would make huge gains in the populous states of Uttar Pradesh, Bihar and Maharashtra which together account for 168 crucial Lok Sabha seats.According to it, the NDA would get 46 of the 80 seats in Uttar Pradesh, from where Modi is fighting one of his two Lok Sabha elections. The BJP and its ally LJP could get 21 of the 40 seats in neighbouring Bihar.In Maharashtra, the BJP (21) and its ally Shiv Sena (11) were poised to net 32 of the 48 seats, leaving the Congress bruised in all three states.A fourth exit poll, on CNN-IBN, said the BJP was expected to do unusually well in West Bengal and Tamil Nadu where traditionally it has been weak.The BJP could win 1-3 of West Bengal’s 42 Lok Sabha seats. The ruling Trinamool Congress could win 25-31, leaving the Left at a distant second (7-11) followed by the Congress (2-4).In Tamil Nadu, the ruling AIADMK was projected to win 22-28 of the 39 seats, followed by the DMK (7-11) and the BJP (4-6). The Congress would be routed, CNN-IBN said.The BJP was also ahead of the Congress in Haryana, Uttarakhand and Himachal Pradesh, exit polls said.