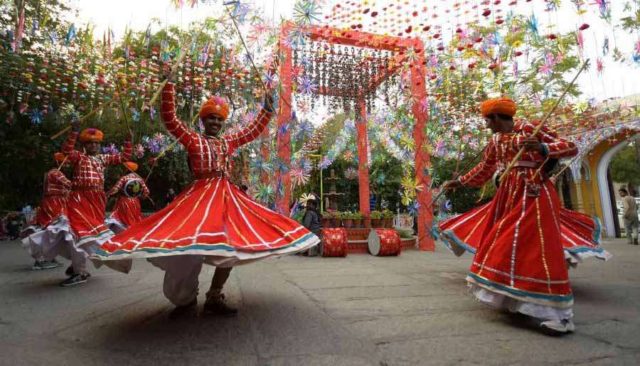 JLF kicks off, Chief Minister Vasundhara Raje gives it a miss. The festival, that will witness over 200 sessions on themes ranging from fiction and non-fiction to journalism and travel writing over the course of five days, was inaugurated by former Rajasthan Governor Margaret Alva and British-born American essayist and novelist Pico Iyer….reports Asian Lite News

A regular to the Zee Jaipur Literature Festival, Rajasthan Chief Minister Vasundhara Raje, who was scheduled to inaugurate the gathering on Thursday morning, gave it a miss.

The festival, that will witness over 200 sessions on themes ranging from fiction and non-fiction to journalism and travel writing over the course of five days, was inaugurated by former Rajasthan Governor Margaret Alva and British-born American essayist and novelist Pico Iyer.

Festival producer Sanjoy Roy in his address urged the visitors to realise the potential and significance of culture. “We know that art and culture is the driving force of our society. It is crucial in contemporary times that citizens understand the importance of culture, he said.

Roy also mentioned that dissent has a crucial role to play in any democracy, but maintained that “it is safe” only “as long as it is expressed within the bounds of the law”.

“Writers and artists live in worlds of imagination. Fringe groups may not agree with every book that a writer writes, every film that a filmmaker makes, every artwork that an artist produces but they give their lives in bringing these precious works to life,” he said.

Meanwhile, with the Shri Rajput Karni Sena going on a rampage in many parts of the country against Sanjay Leela Bhansali’s “Padmaavat”, the authorities are taking additional precautions to prevent any untoward incident. Notably, Mahipal Singh, the president of the fringe group has warned that they will be protesting against the presence of Central Board of Film Certification (CBFC) chief Prashoon Joshi at the festival.

Festival co-director William Dalrymple recalled its 11-year-long journey and said that although there are hundreds of literary events around the globe, there only four or five, which boast of a stellar line-up of award-winning writers. “And we are the only one that is absolutely free for everybody and we are the largest literature festival in the world,” he said.

“For five days, we are once again setting up a mini-university where the greatest minds of Harvard and Oxford will mingle with the winners of Sahitya Akademi Award to make it a truly memorable experience for all of us,” added Dalrymple.

Delivering her speech in Hindi, followed by an English translation, co-director Namita Gokhale highlighted the role that the annual literary gathering has played in bringing literature to the mainstream in India.

“In its eleventh year, there is also a satisfaction because literature has come to the mainstream of our national discourse. Lit fests and similar events are happening across the country, all the year round and this good for the future of our society. We are happy to have played a small role in this,” Gokhale said.

Delivering the keynote address, Pico Iyer expressed his happiness over the fact that even at a time when bookstores and publishers are closing down in many parts of the world, there are new bookshops and publishers, readers and festival in India.

Over the course of five days, Pink City will host several literary stalwarts and witness sessions on literary themes, coupled with book launches and art exhibitions and installations.