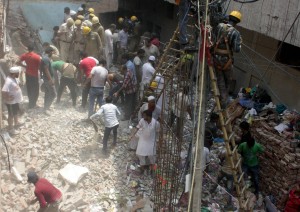 According to officials, 11 people trapped under the debris were rescued of which one person died. The other 10 have been admitted in a nearby hospital of which the condition of one is said to be serious.

The accident took place at Moulivakkam near Porur area here.

Police have two people in custody in connection with the collapse.

According to a fire service official, rescue efforts were continuing at full swing with several fire service personnel and ambulances at the spot.

Most of the people who were trapped under the debris are said to be construction workers from Andhra Pradesh and some might have taken shelter in the building as it was raining at the time of the collapse, people in the area said.

Rescue efforts were hampered early due to power cut and rains. However, officials have made arrangement for lights to facilitate the rescue work.

In a statement here, Tamil Nadu Chief Minister J. Jayalalithaa said a team from the National Disaster Management Authority has been sent to the accident spot to speed up the rescue efforts.

“Police have been ordered to take action against those who are responsible for the incident,” she said.

Senior police and other officials were at the spot.

Efforts were on to reach the trapped workers through mobile phones and other means.

Different versions were going around as to the cause of the accident – structural weakness or a lightning strike hitting it as it was raining at the time of the collapse.

Officials, however, said they were focussing on the rescue work and the cause of collapse would be ascertained later.

Fire service personnel and others were busy cutting the steel rods of the collapsed building so as to reach the trapped people.

The residential project Trust Heights is being developed by Prime Sristi Housing Pvt Ltd. The project consisted of two 11-storeyed blocks – The Belief and The Faith.

Despite several attempts by IANS, company officials were not available for comments.

Meanwhile Governor K.Rosaiah in a statement expressed his shock at the accident and wished the injured a speedy recovery.