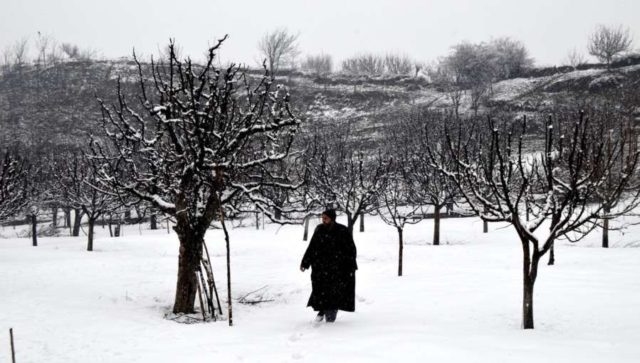 Kashmir’s winter this season has been something children had heard from their grandparents, but never experienced before…writes Sheikh Qayoom

Over metre-long icicles hanging from rooftops, water bodies frozen rock solid prompting youth to slip and skate over them, roads so slippery that even the best drivers were careful, frozen water taps and the migratory birds unable to fend for themselves as wildlife authorities struggled to arrange food for them.

These have been the grandpa stories till this winter brought them to life for the children, who had little feel of how tough one needs to be to brave an extremely harsh winter in the Valley.

Statistics from the weather office confirm that the Valley has witnessed such snowfall after over a decade and the perennial water reservoirs in the mountains that sustain rivers, streams, lakes and springs during the summer months are already overflowing with enough snow reserves.

Given the frequent electric power failures during the winter months, Kashmiris have realised that their best bet against biting cold remains the earthen firepot woven in willow wicker called the ‘Kangri’ and the over-garment called the ‘pheran’.

Thanks to the biting cold in the Valley this year there have been celebrations over the wearing of the pheran on the social media by politicians, bureaucrats and the common man.

“We have been adding innovations to the pheran to make it more trendy over the years. From its traditional loose and long tailored appearance we have made changes to make them more comfortable and fashionable so that they can be worn in offices and other work places,” said Ghulam Nabi, 53, a tailor in old city area of summer capital Srinagar.

For all its supplies of foodgrain, vegetables, mutton, poultry products, medicine and petroleum products the Valley is dependent on the Jammu-Srinagar national highway.

This nearly 300-km-long road has this winter been in news more for the number of days it remained closed than for any traffic smoothly plying on it.

Snowfall in the Banihal sector, landslides and shooting stones along the treacherous Ramsoo-Ramban stretch are this year’s nightmares experienced by travelers on this highway.

The travel on the highway normally takes seven to eight hours, but for hundreds of commuters who used the highway this year, the travel trauma has been between 12 to 18 hours and that too if one is lucky not to be stranded on the way during bone chilling nights.

“You cannot fight nature,” said a senior officer of the traffic department as he pleaded with the Border Roads Organisation (BRO) to move out bulldozers to clear landslide debris along the road in the Anokhi Fall, Panthal, Gagroo and Battery Chashma areas.

“Road widening operations in Ramsoo-Ramban area have been causing more slips of the loose soil triggering landslides and shooting stones each time it rains in the area”, the officer rued.

In the absence of fresh vegetables, mutton and poultry products, people in the Valley have realized the wisdom of their elders who stored dried vegetables like brinjals, tomatoes and pumpkin scalings for the harsh winter months.

“Pulses and dried vegetables come in handy when the markets run dry because of the closure of Jammu-Srinagar highway,” said Noor Muhammad Wani, 65, a retired bank officer.

Thanks to the stockpiling of petroleum products by the authorities during the summer months, there have so far been no shortages of diesel, petrol and kerosene oil in the Valley this winter.

Apart from the hardships one must bear during a harsh winter like this, there have been immense opportunities for adventure lovers.

“It was because of plentiful snowfall that Gulmarg had hundreds of New Year revelers this year. All hotels and huts at the ski resort were completely sold out on new year eve this time”, said an official of the tourism department.

As the adage goes, “winter without snow is summer without the rose”. For Kashmiris, despite its hardships and vagaries, this year’s winter has been a blessing they would remember for a long time to come.