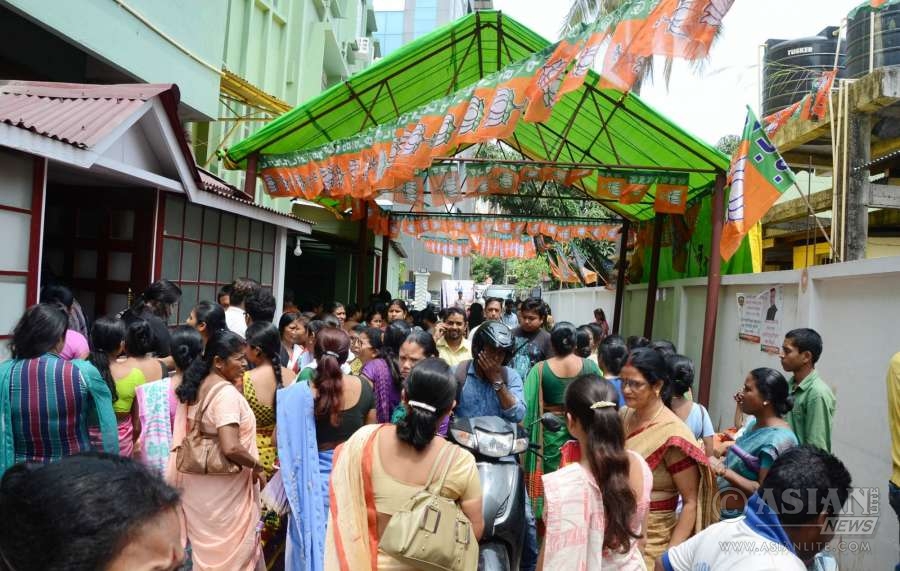 Never since its historical elections in the 1970s — the peak of the Assam students’ movement — has the northeastern state generated so much interest in its polls nationally.

Among the five states going in for assembly elections in April and May, the battle for Assam is turning out to be the mother of all elections for 2016, in more ways than one.

It’s a battle of prestige for both the Congress and the Bhartiya Janata Party. With the so-called ‘Narendra Modi phenomenon’ having failed the party in bringing any electoral success in 2015 in Bihar and in Delhi, Assam would be keenly watched to see whether the prime minister’s image would sway the electorate.

For the Congress, which has just lost power in two states — Arunachal Pradesh and Uttarakhand — to political manipulations, a win would be an immense booster.

In a peculiar turn of events, both the Congress and the BJP face similar challenges. In no other state where elections are being held in this round are the two major national parties vying for power in a direct contest.

Both face internal dissension in the run up to the polls and need to improve their performance in the regional bastions of Asom Gana Parishad (AGP) and All India United Democratic Front (AIUDF).

Congress insiders say the party’s revival in national politics would largely depend on its performance in Assam, because this will show whether it has ben able to retain the party’s traditional hold among minorities and tribals.

“The Congress party’s success in Bihar was only symbolic as the entire credit for it was stolen by the caste combination of Nitish Kumar and Lalu Prasad Yadav. Assam would is the real challenge,” a key Congress leader from Assam told on condition of anonymity.

The leader admitted that the party faced a strong anti-incumbency wave in several seats it had won in Assam in 2011 and the bigger challenge would be to make a dent in the support base of regional outfits – the AGP and pro-minority AIUDF of perfume-baron Badruddin Ajmal.

For its part, the BJP, which is exuding confidence following a favourable opinion poll earlier this week, hopes to reap dividends from voters’ disenchantment in traditional Congress seats, including at least five districts where Muslims are in sizeable numbers.

According to the 2011 census, nine out of Assam’s 27 districts have substantial presence of Muslim voters — who can tilt the balance either way.

With AGP and Bodo People’s Front (BPF) won over as allies, BJP thinks it has an advantage.

Dissension and desertion has hobbled the Congress.

Immediately after Congress announced its first list of Congress candidates, rebellion surfaced in key hubs like Lakhimpur, Mahmora and Duliajan.

Amia Gogoi, the Congress legislator from Duliajan, was not happy as the ticket went to newcomer Dhruba Jyoti Gogoi.

There is also usual allegation of promotion of dynasty in the Congress even at the block and assembly segment levels.

Moreover, they say, BJP is trying to make inroads into the hubs of smaller tribals including Manipuris to wrest Lakhipur seat in Cachar valley.

Manipuris in Lakhipur, Sonai and Udharbond constituencies have already given the visiting BJP team from Manipur a warm welcome.

But there are factors which pose a challenge to the BJP-led saffron alliance.

“In many constituencies, BJP is still considered a party of traders and will not be acceptable to a large section of the Assamese electorate,” says Assam pradesh Congress chief Anjan Dutta.

The BJP counters this saying things have changed. The party is playing national security card to the hilt and has pledged efforts to seal the borders with Bangladesh to prevent infiltration.

In the 2014 Lok Sabha polls, the BJP riding on the Modi wave, won seven of the 14 seats in Assam and had increased vote share to 36.6 per cent, Sonowal said.

“The alliance now expects that in the upcoming polls, the BJP’s vote share in Assam will jump to 44-45 percent,” said BJP leader Kailash Vijayvargiya.