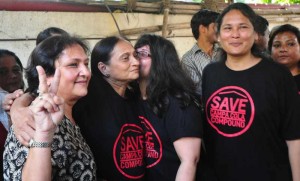 A civic agency squad accompanied by Mumbai police that set out to demolish 140 illegal flats in the Campa Cola Housing Society here returned without taking any action as the beleaguered residents opposed their entry into the complex Friday.

The dozen-strong civic demolition squad, in an attempt to force the residents to vacate the illegal flats, had earlier declared that they would cut off water and power supply before proceeding with the demolition.

However, the residents strongly resisted by locking the society gates, forming a human chain led by women and children, and performing public “pujas” and “havans” in an attempt to stall the razing of their homes.

The Municipal Corporation of Greater Mumbai (MCGM) had made it clear that it would not use force and urged the residents to vacate the place peacefully, but the occupants reacted by shouting slogans and asked the civic squad and police to go away.

The residents were joined by several leaders and activists of the Nationalist Congress Party, Maharashtra Navnirman Sena, Bharatiya Janata Party, Shiv Sena and the Republican Party of India who spoke up for the residents and urged the concerned authorities to take steps to prevent the demolition, or at least give more time to the residents.

“We have already issued notices to the residents under the MCGM Act, Sec. 488, as the deadline for them to continue occupying the flats has expired. Today (Friday), we had come to cut off the water, power and gas lines of these illegal flats. Now, we are contemplating lodging contempt of court against the residents,” an MCGM official said.

As a precautionary measure, the MCGM has videographed Friday’s attempt to enter the society and may submit it as evidence for its failure to act in the Supreme Court.

The Campa Cola Society lost its plea in the apex court June 3 when it challenged its earlier order of Feb 27 to vacate the building by May 31.

The residents contend they are innocent victims of the machinations by the builders and officials. Renowned singer and Bharat Ratna recipient Lata Mangeshkar also owns a flat in the society.

They demanded that instead of penalizing the innocent flat buyers who have invested their lifetime savings, the government must take action against the builders and officials who were responsible for constructing the illegal flats.

The MCGM plans to raze 35 illegal floors and a total of 140 unauthorised flats spread across seven buildings in the Campa Cola Society complex. Around 140 families have been living there for over three decades.