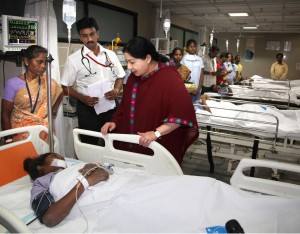 The toll in the collapse of an 11-storey building in Chennai has gone up to 16, while 22 people have been injured, said Tamil Nadu Chief Minister J. Jayalalithaa Monday.

In a statement issued here, Jayalalithaa announced an increase in solatium to the families of the dead belonging to Tamil Nadu by Rs.500,000 to Rs.700,000.

Jayalalithaa said the state government earlier announced a solatium of Rs.200,000 to the families of dead and Rs.50,000 to those who were injured without making any distinctions.

She said the Andhra Pradesh government has announced a solatium of Rs.500,000 to the families of dead belonging to it. As four of the dead belong to Tamil Nadu, Jayalalithaa said the government increased the solatium.

Citing the magnitude of debris on the site, a fire service official said it would take at least another day to clear it.

The residential project Trust Heights was being developed by Prime Sristi Housing Pvt. Ltd. The project comprised two 11-storey blocks – The Belief and The Faith.

Most of the people who were trapped under the debris are said to be construction workers and some might have taken shelter in the building as it was raining at the time of the collapse, people in the area said.

Police arrested five people, two of whom – Manoharan and his son Muthu – are the project developers and the others are engineers.

More than 15 fire tenders and 150 firefighters, National Disaster Response Force personnel and those from other state government agencies are involved in the rescue work.

Giant steel rod cutters and other equipment have been pressed into service, while sniffer dogs and sophisticated cameras are at the accident site to locate trapped people.