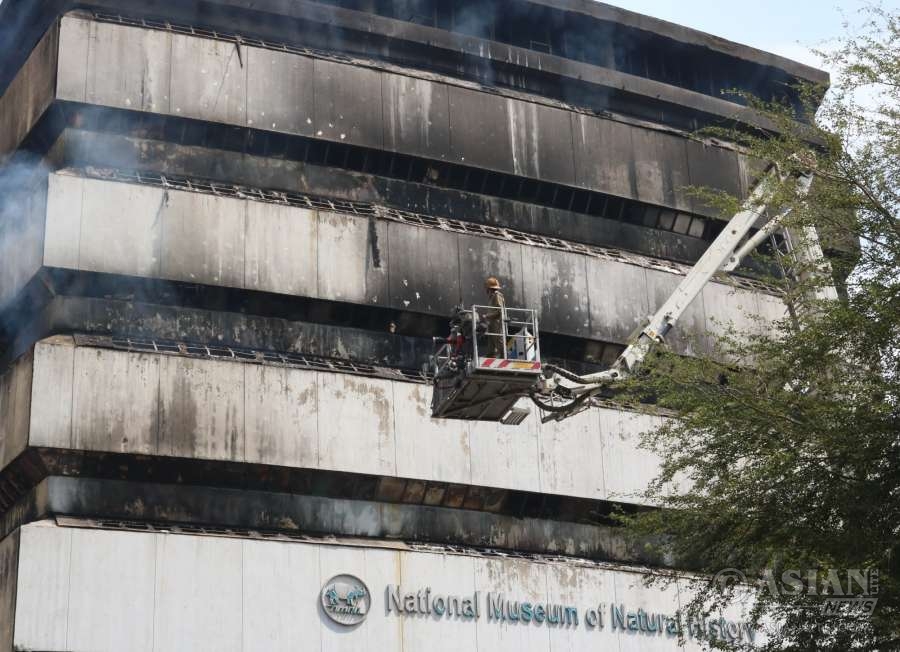 The shocking devastation forced Environment Minister Prakash Javadekar to order an urgent fire audit of all museums across the country as it emerged that the fire fighting system failed to work at the museum.

The blaze erupted around 1.50 a.m. and quickly spread in the multi-storey building which housed the museum, just across the Nepalese embassy and around three kilometres from the Parliament House.

“The museum was on FICCI property. We will assess the damage as soon as we (can) and see how we can restore it,” said a stunned Javadekar.

“Everything has been damaged, some by fire, some by gases and some by the water used to douse the flames,” an official said on the condition of anonymity.

Added Vikas Rana, a museum official: “The museum had many fossils and species. Everything is lost… Around 3,000 children from Delhi and nearby regions used to visit it daily.”

Some 35 fire tenders battled the leaping flames, bringing the fire officially under control by about 6 a.m. By then, virtually nothing in the museum of importance could be saved.

“No human intervention was involved in causing the fire that started from the seventh floor. However, we have completely doused the fire but cooling operation is still on,” Mishra told .

Five fire fighters were rushed to hospital after being injured while trying to contain the blaze.

Then prime minister Indira Gandhi initiated the idea of the museum in 1972 on the occasion of the 25th anniversary of India’s independence.

She desired a museum to depict India’s flora, fauna and mineral wealth to provide an out of school facility for education of children and to promote environmental awareness among the masses, according to the museum’s website.

The museum opened in June 1978, coinciding with the World Environment Day.

It had both permanent and temporary galleries, and provided guided tours by trained educational assistants.

Gallery 1 portrayed the origin and evolution of life and the variety and diversity of the flora and fauna in India.

Gallery 2 gave an overview of major eco-systems of the world, role of plants as primary producers, food chains, and interrelationship among plants, animals and human beings.

Gallery 3 dealt with many aspects of conservation of nature.

The museum provided opportunities to children to handle and examine specimens, participate in creative activities such as modelling and painting and exploration of discovery boxes.