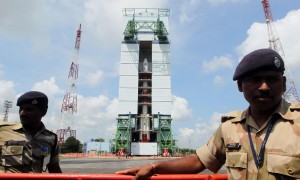 In a written reply to a question in the Lok Sabha, Jitendra Singh – who is also minister for Earth sciences, department of atomic energy and department of space, said the Indian Space Research Organisation (ISRO) launched 15 foreign satellites and 14 Indian satellites during fiscal years 2011-2014 and in this fiscal.

He said the revenue earned through launch of foreign satellites was 39.82 million euros.

Jitendra Singh also said the department of space has laid down the future space programme till 2020.